They say they have even caught some.

We don’t know whether these two news items are related. We do know we’re glad Valdosta recognizes that people downstream will continue to think they’re the cause of every Withlacoochee River contamination incident unless they actively find the real culprits.

Don’t worry: we post positive news about Valdosta when there is some, but we continue to watch them and other possible contamination sources like a hawk.

The City of Valdosta urges citizens to dispose of their camping, boating, agricultural, and everyday waste appropriately to ensure that it does not end up in the rivers, streams, or creeks. The Utilities Department has made numerous efforts to identify offenders and alleviate this issue. Still, the Utilities staff asks residents to help out by taking personal responsibility for their waste or reporting any acts of illegal dumping.

If you take a trip down to any of the rivers, creeks, and streams that flow through the Valdosta area, chances are that you will see full tall trees, flowing waters, and bits of litter leading to and near the water’s edge. It is an unfortunate but harsh reality that can ultimately be avoided. This litter creates an issue because it will inevitably impact the water quality and wildlife that reside in it if isn’t removed. When food items are discarded, for example, it can attract vermin to the edge of the creek. When they dispose of their waste, it ends up in the stream, resulting in increased fecal material in the water. Utilities Director Daryl Muse assures residents that the City Utilities Department takes a weekly measurement of those numbers to monitor all debris and litter’s effect on the waterways. Still, certain areas do see an increase due to illegal dumping activity. Muse says they have also seen an increase in residents that are discharging campers or other devices into the river, which adds to this contamination as well.

“It is bad for everyone, for people who want to enjoy the water. Whether you like to swim, canoe, or fish on the river, no one wants to use a waterway that is contaminated,” said Muse. “This contamination is not limited to Valdosta alone. We also have to think of our neighbors. The waterways flow down south and eventually through Florida. All of the waste and products that are not designed to be in the water adversely affects everyone’s ability to enjoy it. This is why it is crucial to be a good steward of the environment and dispose of waste in the designated areas. 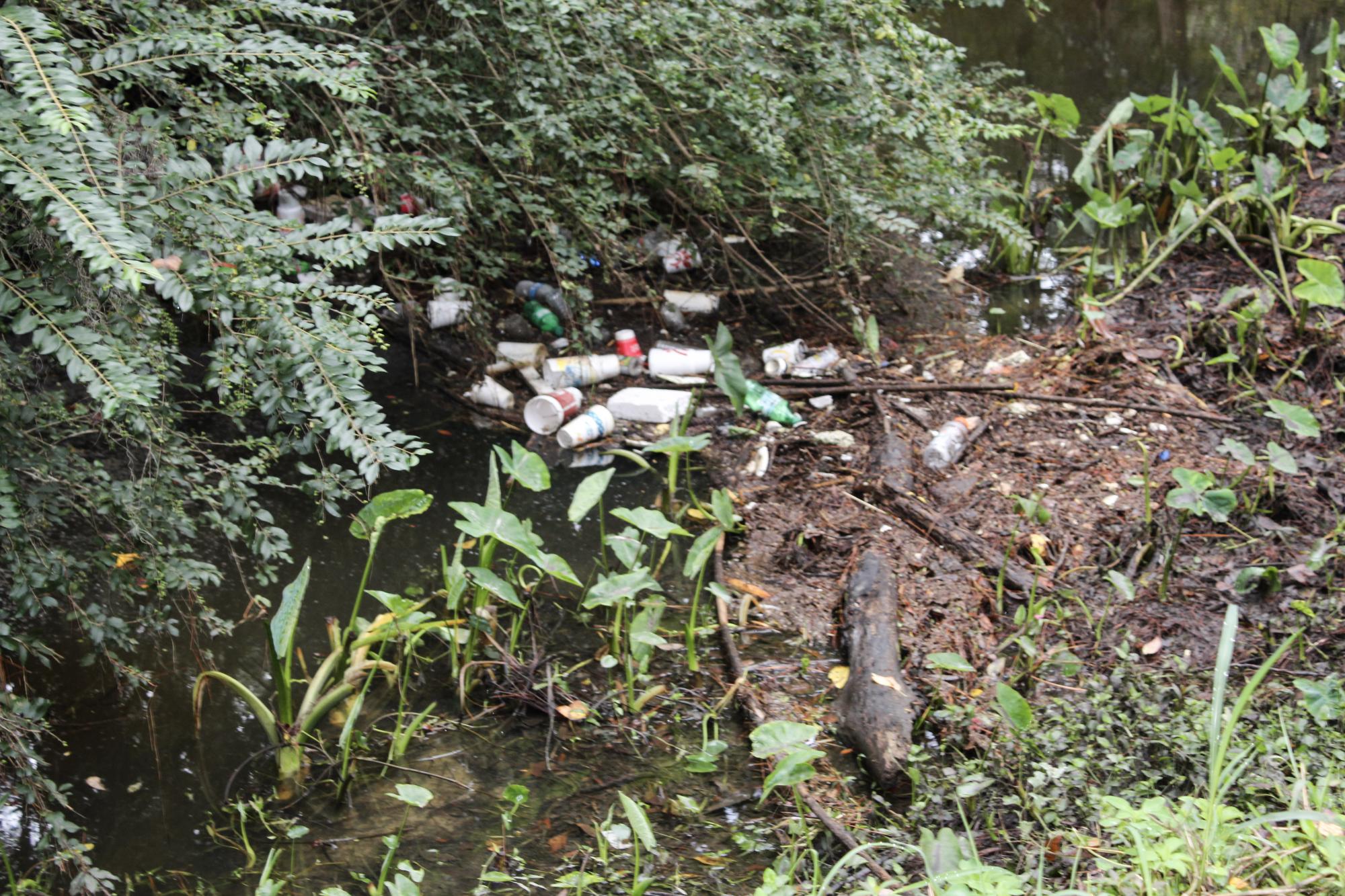 Knowing that this is an ongoing issue, the City recently implemented an aggressive program to find some of the culprits. So far, a few violators have been identified and turned over to the City Marshals. From there, they must appear in Magistrate Court and are subject to fines, but more importantly, the City wants them to understand the impact of their actions. The program has been in place for almost a year. Since it was implemented, the City has made some significant breakthroughs in identifying precisely where the litter and waste is coming from and are starting to look closely at the areas where the issue is more prevalent.

The City recently held community and river clean-up events to help combat this issue. These events have also served as an eye-opener to how severe the problem is. Hundreds of pounds of litter and debris were recovered during the river clean up, including plastic bottles, bags, food items, household appliances, and much more. Another element people may not consider when discarding their waste is that even if it is not disposed of in or near a waterway, it can still be washed down after a rain event. “People discard whatever they are finished with along the banks or in the street, and then it rains and ends up in the drains. Which usually finds its way to a body of water. So, if you are throwing bags or cigarette butts out the window, all of that eventually contributes to the water quality. When you have a population of 100,000 people, every little bit of waste can add up,” said Muse.

To report illegal dumping near or on the waterways, please call Environmental Manager Scott Fowler at (229) 259-3592.

The appointment is effective immediately. Both Ammons and Hardy will still maintain their director role within their current departments and provide leadership and oversight to the Departments within the city.

“Catherine Ammons and Richard Hardy are dedicated public servants and leaders in every sense of the word,” said Barber. “Their accomplishments within their respective departments have made positive impacts on the City of Valdosta, and I’m excited to see what they each can do in other areas of the city organization.”

Ammons joined the city’s Human Resource Department in 2018. She served previously as the Director of Human Resources at Wild Adventures Theme Park, where she focused on implementing human resources strategies by establishing department accountabilities, managing and developing human resources operations, and accomplishing special project results. During her time at the City of Valdosta, Ammons has initiated the employee handbook’s revision process, improved employee communication, and established new, effective policies and procedures for human resources and risk management.

Catherine has lived in Valdosta for five years and is excited to work more closely with city departments.

“I am excited and thankful for the opportunity to be appointed to Deputy City Manager of Administration. I love our city and am proud to take on this important job. We are in challenging times, but I want the community to know that we have an incredible team of dedicated, smart, and hard-working staff that will get us through this to continue to be the world-class city we all know and love well into the future. I expect to continue offering strategic, collaborative, and inclusive leadership to help advance the city’s priorities,” said Ammons.

Hardy has served as the Director of Public Works for the City of Valdosta, Georgia, since September 2014. He directly oversees nine divisions, including Commercial and Residential Sanitation, Recycling Collection and Distribution, Right-of-Way Maintenance, Sunset Hills Cemetery, Mathis City Auditorium, Fleet Maintenance, Facilities, and Ground Maintenance, and the Roll-Off Division. Hardy currently serves as a member of the American Public Works Association (APWA) Small Cities and Rural Communities (SC/RC) Committee and is now an active member of Georgia’s APWA Southwest Branch. He is the Vice-Chairman of Deep South Regional Municipal Solid Waste Management Authority, where he represents the City of Valdosta in sanitation, grant acquisition, and landfill disposal requirements.

Hardy is a former APWA President for Georgia’s Southwest Branch. He is a 33-year Department of Defense Veteran and a retired Chief Master Sergeant (CMSGT) of the United States Air Force (USAF).

Hardy holds a Bachelor of Science in Occupational Education from Wayland Baptist University, a Master’s of Science in Information Systems from American Sentinel University. He received his Certificate of Local Government Management by completing the Management Development Program from the University of Georgia, Carl Vinson Institute of Government. He has also completed seven tiers of Professional Military Education focused on Leadership and Management.

“I am grateful for this amazing opportunity and honored to be appointed to the Deputy City Manager of Operations position. The City of Valdosta is incredible, and I look forward to continuing to work with the dedicated city employees, elected officials, and citizens of this great community,” said Hardy.

That Valdosta PR does not say, but Richard Hardy did, at a recent meeting of the Deep South Solid Waste Authority, that his recent promotion to Deputy City Manager leaves him still in charge of Public Works, but also over Engineering and Utilities. He said that’s the way it is in many cities.

It’s good to see Valdosta trying to act like the most populous city in the Suwannee River Basin.