The Comprehensive Plan emphasizes building a boat ramp at Berrien Beach; this sounds perfect to go in an RTP grant proposal.

This is the old plan before the updates in 2012 and 2014. It has much more about rivers, creeks, wetlands, groundwater, aquifer, etc. These are a few excerpts.

Berrien County’s lowest elevation is about 143 feet above sea level at the county’s southwestern corner where the Withlacoochee River enters neighboring Lowndes County. Another low point in the county (168 feet) is at the county’s southeastern comer where the Alapaha River enters neighboring Lanier County. The highest elevations are a little greater than 350 feet along several hilltops in the northwestern part of the county. The highest elevations are all north of the City of Enigma and generally lie along CR 106.

Most of the City of Nashville is above 230 feet, with the courthouse and downtown area averaging around 240 feet. The city’s lowest elevation is about 185 feet along the Withlacoochee River at the far southwestern corner of the city limits. The highest elevations are a little greater than 250 feet along Enigma Road at the northern city limits, and in the residential subdivision along US 129, about one mile north of Berrien County High School. The City of Alapaha is generally very flat with elevations ranging from about 285 feet along the city limits to a little greater than 290 feet in downtown. However, the far northeastern corner of the city drops nearly 60 feet down to the Alapaha River floodplain where the elevation is only 230 feet. Most of the City of Enigma is above 300 feet with the downtown United Stated Geological Service (USGS) benchmark being set at 314 feet.

Elevations otherwise range from about 263 feet in the extreme southwestern part of the city near Hardy Mill Creek, to a little more than 330 feet near the northern city limits west of Turner Church Road. Elevations in the City of Ray City range from 170 feet where Cat Creek exits the western city limits near SR37, to a little greater than 210 feet in the northeastern part of the city east of SR 64. Most of the City of Ray City is above 180 feet with the downtown averaging near 190 feet. Other elevations in the county include: 204 feet at Rays Millpond, 246 feet at Tenmile Bay, 275 feet at the West Berrien School, 226 feet at Bannockburn, and 218 feet at New Lois.

The county’s topography and forest cover is such that notable views and vistas are not present. The most pronounced topography is where the floodplain of the Alapaha River cuts through the northern part of the county. Here, total elevation changes can be in excess of 100 feet over a short distance. The flat flood plain ranges from approximately 4,000 to 6,000 feet wide and is bounded by steep banks, which are commonly 40-50 feet high such as those at Rowe Town Church. Like other major rivers in south Georgia, the Alapaha River is a dark water slow flowing river containing a dense tree canopy and broad floodplain, and is navigable by canoe only part of the year.

Groundwater recharge areas in Berrien County are mostly limited to narrow strips running parallel to both banks of the New River, Withlacoochee River, and Hardy Mill Creek. There is also a wider strip running parallel to the northeasterly bank of the Alapaha River floodplain in northern Berrien County. All aquifer recharge areas are vulnerable to both urban and agricultural development. Pollutants from storm water runoff in urban areas and excess pesticides and fertilizers in agricultural areas can access a groundwater aquifer more easily through these recharge areas. Once in the aquifer, pollutants can spread uncontrollably to other parts of the aquifer thereby decreasing or endangering water quality for an entire region. Therefore, development of any kind in these areas, including installation of septic tanks, should be restricted.

The Georgia General Assembly passed the “Mountain and River Corridor Protection Act” in 1991 which requires local governments to adopt corridor protection plans for certain designated rivers affecting or bordering their jurisdiction. In Berrien County, the only river affected by this Act is the Alapaha River.

The county can be divided into 2 major drainage basins for major rivers in south-central Georgia.. The Withlacoochee River drainage basin encompasses approximately the western three-fifths of the county and includes Enigma, Ray City, the western half of Alapaha, and all but the eastern airport area of Nashville. The Withlacoochee River itself originates in northern Berrien County and is fed by many tributaries including Cat Creek and the New River. The Alapaha River encompasses the remaining part of the county and its primary tributaries include Tenmile Creek and the Willacoochee River. Both of these major rivers flow southward from Berrien County to the Suwannee River (in Florida), which empties into the Gulf of Mexico.

When following the generally winding stream channel, the length of the corridor is approximately 25 miles along both sides of the river from the Irwin County line southeastward to the confluence of the Willacoochee River at the Atkinson County line. From there, the corridor follows the winding stream channel (and the eastern county boundary) southward for approximately another 26 miles until the river enters Lanier County. Therefore, the total length of the designated river corridor within Berrien County is approximately 51 miles.

Under the Act, Berrien County adopted the “River Corridor Protection Ordinance” in 1990 for the Alapaha River in accordance with the minimum criteria contained in the Act and as adopted by the Georgia Department of Natural Resources. With exception of approximately three recreational dwellings and a few road and railroad bridges, field surveys in Berrien County indicate only natural (mostly riverine wetlands) vegetation associated with river floodplains to be located within 100 feet of the river banks which is the state’s minimum corridor width. There are no other land uses currently within this area along the Alapaha River. To ensure compliance with state rules and regulations, to protect the health and welfare of the citizens, and ensure that lands are protected. Berrien County has adopted a Soil Erosion and Sedimentation Control Ordinance (2001), County Subdivision Regulations (2002), and Land Development Codes.

Continue the development of the walking trail with TEA grant: County; Turned over to City

Build a boat ramp for the Alapaha River: County; Ongoing 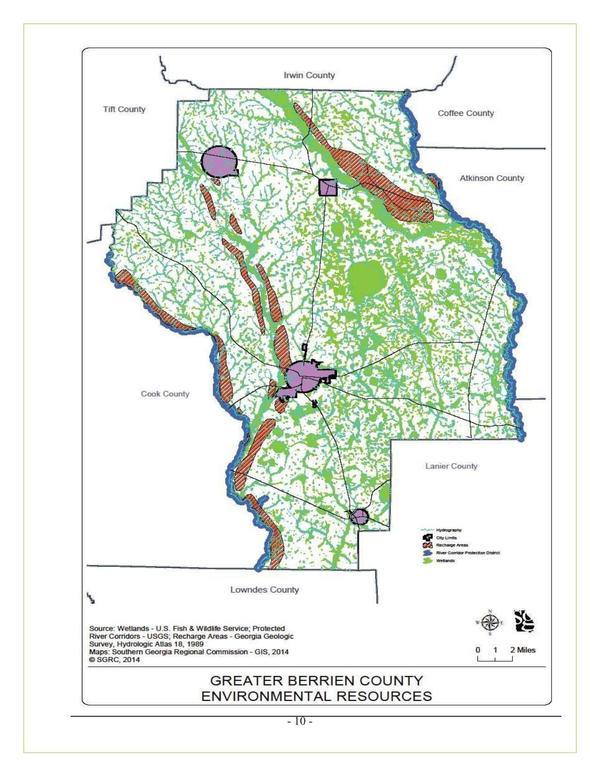 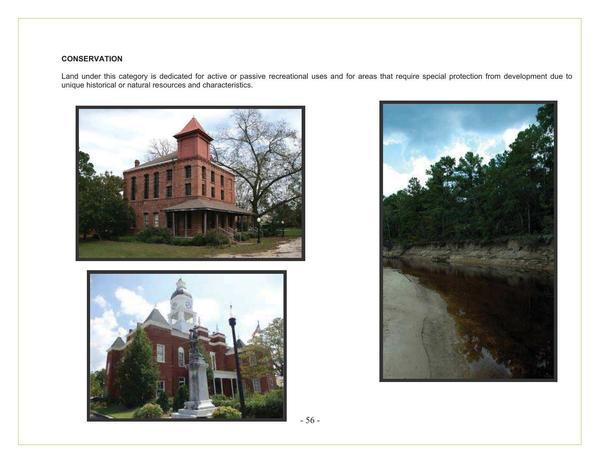