The grant application materials requested: “Include a brief timeline for your project plan, highlighting major milestones and tasks to be accomplished including expected completion dates.”

This timeline originated with the one in the grant proposal, and material from the proposal is in italics. The grant contract did not include the proposed material about the Alapaha River Park that Lowndes County is establishing, so references to that are struck through in this timeline. WWALS is still talking to the Lowndes County Commission (LCC) and the Valdosta-Lowndes County Parks and Recreation Authority (VLPRA) about the park, but it’s not part of the work to implement the grant, other than wanting to get signage and brochures at the park for the Water Trail.

All dates are proposed, and may change in communication with other organizations, especially VLPRA and LCC, and with river water levels.

2014-07-09: The Alapaha Water Trail Committee was established by the WWALS Board at its regular meeting of 9 July 2014, with initial members Chris Graham (Chair), John S. Quarterman, Bret Wagenhorst, Karan A. Rawlins, Kathy Brunot. April Huntley was added by the WWALS Executive Committee at the request of the committee chair. Current members are listed under committees on the WWALS website. 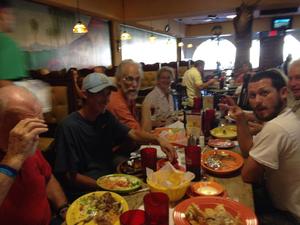 6PM Monday 18 August 2014: one of two proposed times for telecon with GRN. Physical meeting location (if any) to be determined.

6PM Thursday 21 August 2014: one of two proposed times for telecon with GRN. Gwyneth Moody picked this one. Physical meeting location (if any) to be determined.

2PM Sunday 24 August 2014: Outing proposed to approved by WWALS Outings Committee from Lanier County Hotchkiss Road to US 84, the site of the proposed park. Alapaha Water Trail Committee to meet at the outing.

16 September 2014: In Search of Alapaha’s End “a last minute Labor Day trip down the Alapaha in search of where it goes under ground or dries up”.

23 September 2014: Letter to Lowndes County, GA Commission, like ones delivered to all the other counties and county seats along the Alapaha River Water Trail (Echols, Lanier, Berrien, and Atkinson Counties, Georgia, and Hamilton County, Florida).

2 October 2014: Glenn Dowling of Georgia River Network sent this brochure from the 1970s for the Alapaha River Trail.

15 October 2014: “I met with Amanda Peacock today from the Georgia Tourism (Explore Georgia) and gave her a copy of the current brochure, the map that Chris M had printed and the map that Dennis Price had brought. She got us set up by the afternoon with the exploregeorgia.org web site so we can announce our events there. Once we have our brochures and/or cards she can help us get them into the 12 Visitor centers across the state.” –Gretchen Quarterman

13 November 2014: Committee members Chris and Deanna Mericle hiked to the Alapaha River Sink and reported back with pictures.

15 January 2015: mid-year progress report for GRN grant was submitted and approved by GRN.

2. Final Report – A complete report, showing the expenditure of funds (budget) and the progress made in accomplishing the purposes of the grant will be submitted by Grantee to GRN by May 15, 2015. A mid-year progress report will be due January 15, 2015. Failure to submit a report by this date will render the organization ineligible for a grant in the next grant cycle.

1 March 2015: Draft map with all boat ramps and canoe launches and many other access points, three outfitters, camping, two sinks and several springs, all river gauges, all road bridges and railroad bridges, all sponsors of the Water Trail, and all logo contest prize donors.

Spring 2015: Alapaha River Park at US84 completed (this date depends greatly on LCC and VLPRA).