“We have two returning judges and a judge from a younger generation,” said Contest Committee Chair Tom H. Johnson, Jr. “Submissions are due by July 8. We’d like songs from every age group and every genre.”
https://forms.gle/Ztxm8xmwwoAjPLj86

The new judge this year is Emmy Law, who made a name for herself in Atlanta, and has moved on up to Nashville, Tennessee. She has several songs published.

In his third year as judge, J. J. Rolle plays around Valdosta, Georgia, and has forged as far afield as some years in Ireland. He has a background in musical theater as well as his career as a solo musician.

Back from the first year, Cindy Bear is well known as a solo act around Jacksonville, Florida, and also as half of Bear and Robert (pronounced “Row-bear”), a Blues, Folk and Americana duo with her husband, Franc Robert.

This is the Third Annual Suwannee Riverkeeper Songwriting Contest, this year at 7-9 PM, Saturday, August 22, 2020, in the Turner Center Art Park, 605 North Patterson Street, Valdosta, Georgia 31601. That’s across from the Turner Center for the Arts in Valdosta, GA, with plenty of room for physical distance.

Submissions can be songs about any river, stream, spring, sink, swamp, lake, or pond in the Suwannee River Basin or Estuary (except not the Santa Fe Basin; that has its own contest). Judging of finalists will take into account integrity and value of the waters, historical value, originality of lyrics and music and musical consistency between them, performance, and clarity of message. Extra credit for naming the most rivers (springs, etc.). Even listing them counts; tying them together in a way that shows their value is better.

Meanwhile, tickets are available, $10 online (children under 12 free), or $12 at the door. For VIP tables send email to song@suwanneeriverkeeper.org.

“The Master of Ceremonies will be Scott James of Talk 92.1 FM Radio,” said Suwannee Riverkeeper John S. Quarterman. “Yes, Scott James is also the Mayor of Valdosta, and all elected officials present will be offered 3 minutes to speak; just remember this is a musical celebration, not an airing of grievances.”

Headliners will play, then the finalists will play for the judges and for the audience.

There will be a food truck and cash bar.

While the judges deliberate, speakers will talk about outings and advocacy.

There will be a silent auction and kayak raffle.

Prizes will be awarded, culminating with the $300 First Prize.

Finally, the winners will play. It’s musical summer evening fun. Come on down!

Much more about the Contest is here, including contest Rules, song submission form, and tickets:
wwals.net/pictures/2020-08-22–songwriting/

About WWALS: Founded in June 2012, WWALS Watershed Coalition, Inc. (WWALS) advocates for conservation and stewardship of the Withlacoochee, Willacoochee, Alapaha, Little, Santa Fe, and Suwannee River watersheds in south Georgia and north Florida through education, awareness, environmental monitoring, and citizen activities. John S. Quarterman is the Suwannee Riverkeeper®, which is a staff position and a project of WWALS as the member of Waterkeeper® Alliance for the Suwannee River Basin. 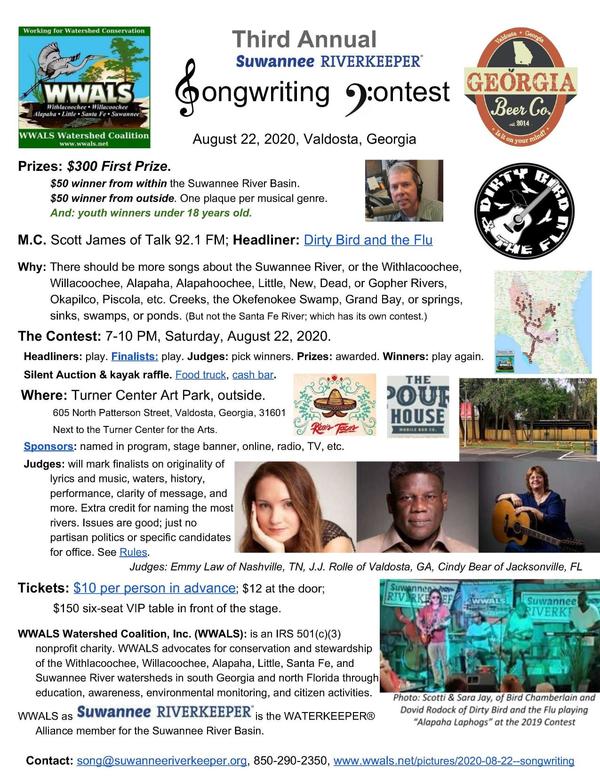