Nov 4th a paddler noticed the barrel. Took a picture of barrel and label. 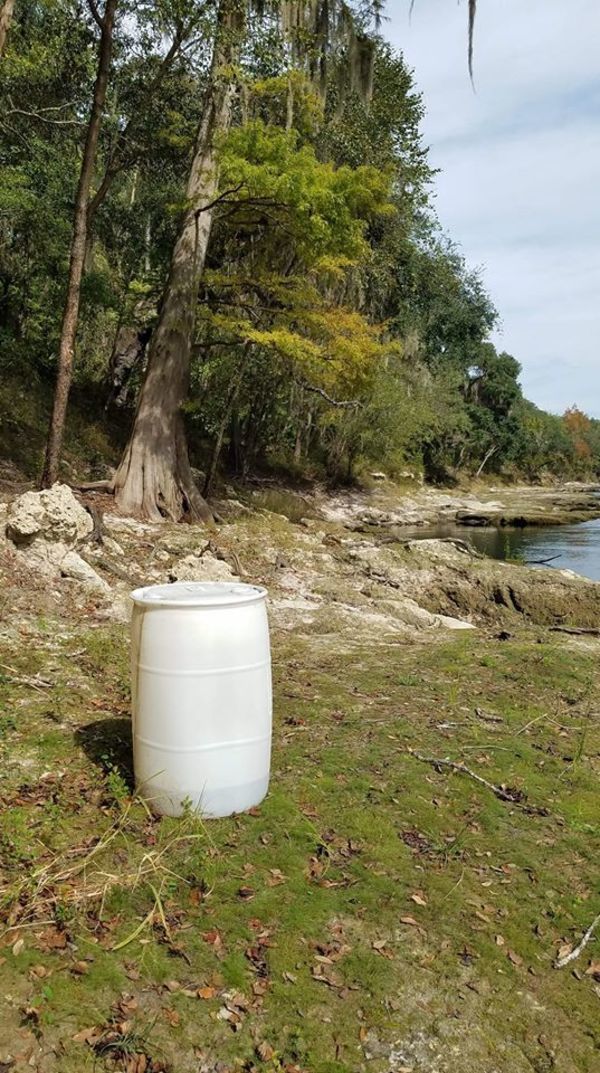 I asked his location. He was very accurate. I looked up the label information and was alarmed. 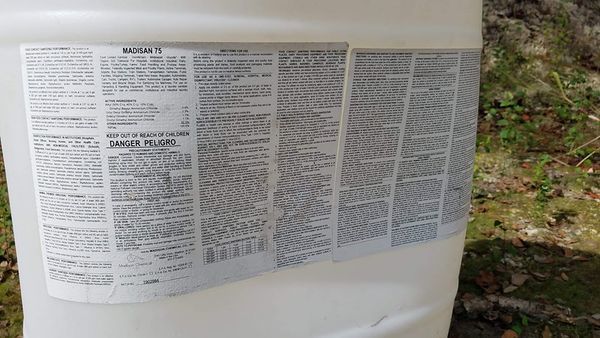 I happened to be off work the next day. 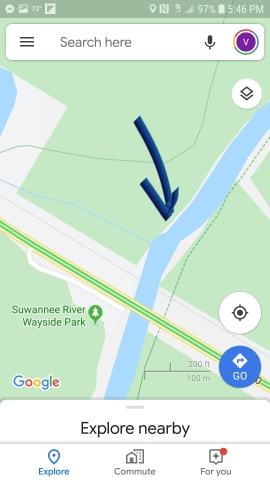 Upstream on the Suwannee River from US 41

I called John Quarterman and asked how to go forward. I posted the pics to WWALS to see if anyone had time to assist or observe a potential water test. As per JSQ advice I called several agencies, state and local. 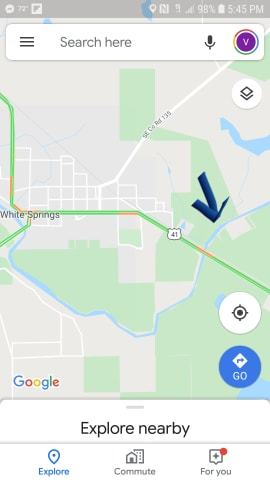 Near White Springs, in Hamilton County

First, [Suwannee River Water Management District] SRWMD, 386-362-1001. Chose the option on the recording to speak with operator. After speaking with receptionist, I was transferred to the office of Darlene Velez. Left a message on machine and was disconnected. I called back and spoke with receptionist again. Gave her a brief of my intentions, relayed a message to Mrs. Velez via idk… Receptionist said they didn’t do that kinda thing and suggested I call Dept of Environment. Which we already intended to do.

It was good to talk to you just now on the telephone.

Since then I have received some pictures of the barrel, and some maps of its location.

It appears to actually be in Hamilton County, also on District land. 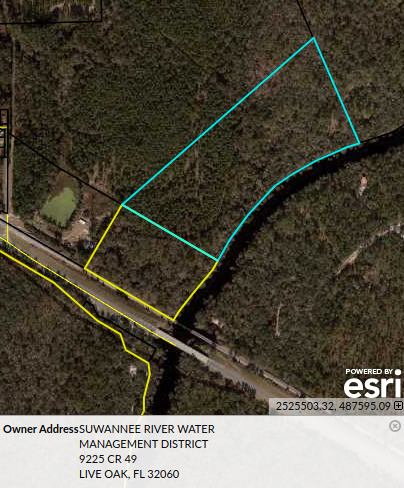 The picture of the label is hard to read, but it could say Madison 75.

The manufacturer of that describes it as:

“MADISAN 75 is a 4-chain quaternary, food contact surface sanitizer, disinfectant, mildewstat and virucide designed for use on food processing equipment and farm premise applications. It may be used in hospitals and other health care institutions. MADISAN 75 may be used on hard, non-porous and inanimate surfaces.”
https://madchem.com/wp-content/uploads/2018/12/MADISAN-75-TD.pdf

Probably not something we want in our rivers.

Thanks for looking into this matter.

Many thanks for sending the photos, maps, and label information John! I’ll get back to you soon.

Meanwhile, I told Scotti if he went to see the barrel, be sure not to touch it. Let trained personnel do that.

Called [Florida Department of Environmental Protection] FDEP in Tallahassee 850-245-2010. received a message it was not a working number. Apparently they were having problems with some phone lines that day. After calling a few more times I got through but lost the call. Finally I got a number I believe the State Watch Hotline 1-800-320-0519. I called and filed a report. I was told to await response. I believe this was it went in as an actual, recorded call, report.

I called local [EOC] and recieved a contact, pallen@hamiltoneoc.com Was told to send pics and map to her email.

Called [Florida Fish & Wildlife Conservation Commission] FWC 888-404-3922. Their phone menu was a bit varied, but I found a Relations Office number 850-488-4676. I was connected with officer Tracy McKinney who provided me with his email Tracey.McKinney@myfwc.com. I sent Tracey the photos and map. He immediately called me back to confirm. About 20 minutes later he called me back, confirmed report with FDEP, and told me two environmental investigators would be near or in the county soon. I thanked him and Sara and I prepared to go to the location.

Shortly after Melissa Woehle from the Emergency Response FDEP in Tallahassee called me back. Gave her all my info, and she told me she was coordinating with FWC to respond. Called Hamilton EOC back to verify they had recieved my info. Had a mispelling with the email, and resent. Response was thanks.

Relayed the correspondence with JSQ and shortly after recieved a call from FDEP Melissa Woehle, she told me she and coworker were loading up in Talahassee to respond and remove barrel. She expressed to me, “Whatever’s in the barrel, we dont want it in the river.” We exchanged info and I informed her Sara and I would meet them there after explaining to her we represented wWALS, the water testing program, and volunteered for the watershed. In my opinion, this declaration made the responders more aware we knew what we were doing. Actually each persons we contacted were informed who we volunteered for.

Sara and I arrived early, and she began the water testing procedures and the barrel was visible from the ramp.

Melissa arrived with Kyle, I wasnt given a last name.

We pointed out the barrel and they trekked down the bank to inspect. The barrel was tightly closed and did not seem to be breached. The cap was firm and Melissa retrieved a specific tool to retighten the cap. The barrel was then transported back to the ramp. Where the officials loaded it upon a flat bed.

I’ve fixed some spelling, expanded some acronyms, and added some paragraph breaks; otherwise the report is as Scotti wrote it.

It had between 10-15 gallons of what seemed to be the chemical. It was a dangerous substance. Especially in a concentrated form.

This is what the barrel label appears to say:

KEEP OUT OF REACH OF CHILDREN
DANGER PELIGRO

PRODUCT CAUTIONS:
DANGER! Corrosive. Causes irreversible eye damage and skin burns. Harmful if swallowed, inhaled or absorbed through the skin. Avoid breathing spray mist. Do not get in eyes, on skin or on clothing. When handling, wear goggles, impermeable gloves and other equipment as required to avoid contact. Wash thoroughly with soap and water after handling and before eating, drinking, chewing gum, using tobacco or using the toilet. Remove contaminated clothing and wash clothing before reuse.

This product is toxic to fish and aquatic invertebrates. Do not discharge effluent containing this product into lake, streams, ponds, estuaries, oceans or other water unless in accordance with the requirements of a National Pollutant Discharge Elimination System (NPDES) permit and the permitting authority has been notified in writing prior to discharge . Do not discharge effluent containing this product into sewer systems without previously notifying the local sewage treatment plant for authority. For guidance contact your State Water Board or Regional Office of the EPA.

Both those references continue with first aid advice. The first reference above has it as:

EMERGENCY FIRST AID:
Have the product container or label with you when calling a poison control center or doctor or going for treatment.

EYES: Hold eye open and rinse slowly and gently with water for 15-20 minutes. Remove contact lenses, if present, after the first 5 minutes, then continue rinsing eye. Call a poison control center or doctor for treatment advice.

INHALATION: Move person to fresh air. If person is not breathing, call 911 or an ambulance, then give artificial respiration, preferably mouth-to-mouth, if possible. Call a poison control center or doctor for further treatment advice.

NOTE TO PHYSICIANS: Probable mucosal damage may contraindicate the use of gastric lavage. If use is contemplated for purposes other than, or by methods different from those specifically recommended herein, please contact the manufacturer for advice.

MADISAN 75 SHOULD BE USED WITHIN 12 MONTHS OF RECEIPT.
FOR INDUSTRIAL USE ONLY – KEEP OUT OF THE REACH OF CHILDREN

I really don’t think we want that in the Suwannee River or getting on children or anybody.

Meanwhile, you may recall that back on November 5th SRWMD said they would get back to me. Hearing nothing, on November 11th at 10:11 AM I sent this:

FDEP did retrieve the barrel, which did have about ten gallons of toxic substance in it.

We’ll be posting a report soon.

Is there any word on Pot Hole Spring?

To which Coordinator Minno responded the next morning, 8:31 AM:

Thanks for alerting us about the barrel. Glad to hear that it’s been removed from the site. I’m planning to visit Pot Hole Spring tomorrow. I’ll let you know how it looks.

So a week after we reported the barrel to SRWMD, they still hadn’t responded. Nevermind FWS picked up the barrel the next day.

Apparently if you want speedy response, call FDEP. FDEP has a list of Emergency Contact Numbers, which lists first for the state:

If you want something inspected within a few weeks, call SRWMD.

I should add that Scotti was representing WWALS because when he asked me I told him to do so, since he got the report and he could go to the site.

In general, board members and staff speak for WWALS, but we can delegate as we did in this case. And of course anybody who is volunteering for WWALS can say they are doing that.

This was an exercise in finding out which agencies would respond. Now we know. We’ll be posting an emergency contact web page.

Thanks to our informant for telling us about the barrel.

Thanks to Scotti Jay for following up and reporting.

Thanks to Melissa Woehle and Kyle of FDEP for collecting the barrel.

Thanks to Bobby McKenzie and Loretta Tennant for following up about toxicity.

Thanks to Scotti Jay and Sara Squires Jones for water quality testing. Fortunately, the tests showed nothing bad upstream or downstream of the barrel.