At 4.32 million gallons per day (mgd) monthly average, Twin Pines proposes to withdraw more Floridan Aquifer water than almost anything in the surrounding six southeast Georgia counties: 4.32 times the City of Folkston, and almost four times the notorious Nestlé withdrawal request for Ginnie Springs on the Santa Fe River in Florida. You can still comment to the U.S. Army Corps of Engineers about the TPM mining application. Or to GA-EPD about this water withdrawal permit. 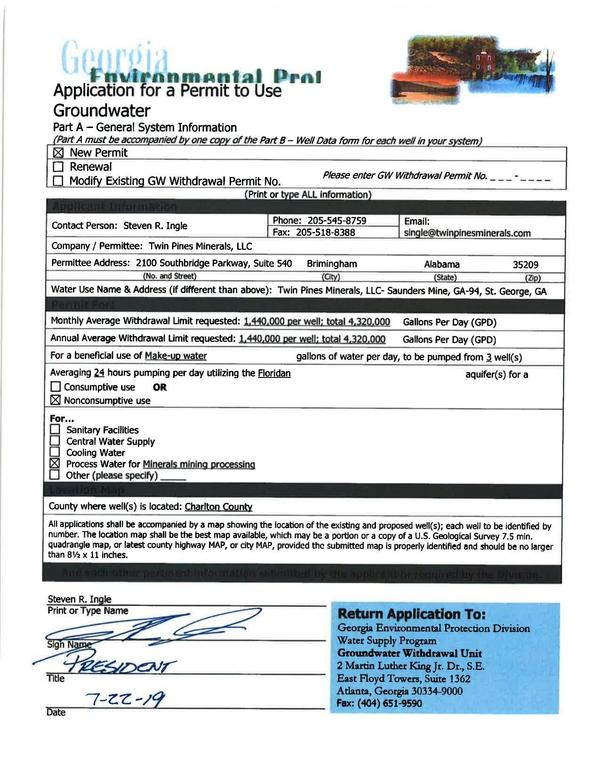 The only things bigger nearby are the City of St. Marys (6 mgd) and the Rayonier paper mill at Jesup (74 mgd).

For comparison, Kingsland 4, Waycross-Ware County Industrial Park 3.4, Waycross 3.16, Jesup 3, Kings Bay Submarine Base 2.9 + 1 for irrigation, Satilla Regional Water and Sewer Authority 2.2, Folkston 1.0. Even Chemours in Wayne County only wants 0.605 and Southern Ionics only 0.504 in Charlton County and another 0.504 in Pierce County.

All the permitted withdrawals in Charlton County add up to less than half what TPM wants for its titanium mine near the Okefenokee Swamp:

For further comparison, the 1.152 mgd Nestlé wants from Ginnie Springs on the Santa Fe River in Florida is barely more than a quarter of what TPM wants from the same Floridan Aquifer. Each of the three wells TPM proposes would draw more water than Nestlé has applied for.

That Nestlé application is getting national and international coverage. This TPM withdrawal application should, as well.

This TPM water withdrawal application would, according to TPM’s own application, affect the Floridan Aquifer under the Okefenokee Swamp. 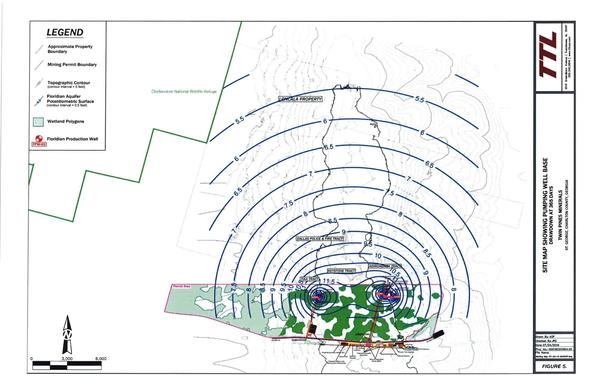 As pointed out in the Suwannee Riverkeeper comments to the U.S. Army Corps of Engineers, the Swamp already interchanges water with groundwater. As pointed out to the Corps by Okefenokee Swamp Park (OSP), any change to the water level in the Swamp would affect the whole Swamp, as far as OSP on the north and Stephen C. Foster State Park on the west. The Swamp is the headwaters of the Suwannee and St. Mary’s Rivers, so anything that affects the Swamp can affect those rivers.

The nominal comment deadline was Thursday, September 12, 2019, but the Corps will not say it will not read comments sent in later, so you can still send in your comments, and post them on social media, as op-eds, etc.

The other withdrawal figures for the six southeast Georgia counties were obtained from GA-EPD thanks to MarthaJane Winkler.