Some of what I said:

Much of what Quarterman and the watershed coalition does is educate people who use the Floridan aquifer, he said.

It’s important to get people out on the water to show them the importance of the natural resource, but since most of the drinking water is more than 400 feet below them, it’s hard to make people appreciate the resource, he said.

“We want to be careful about using up the aquifer,” Quarterman said. “The water level goes down each year, and each year we have to dig deeper to get to the water.” 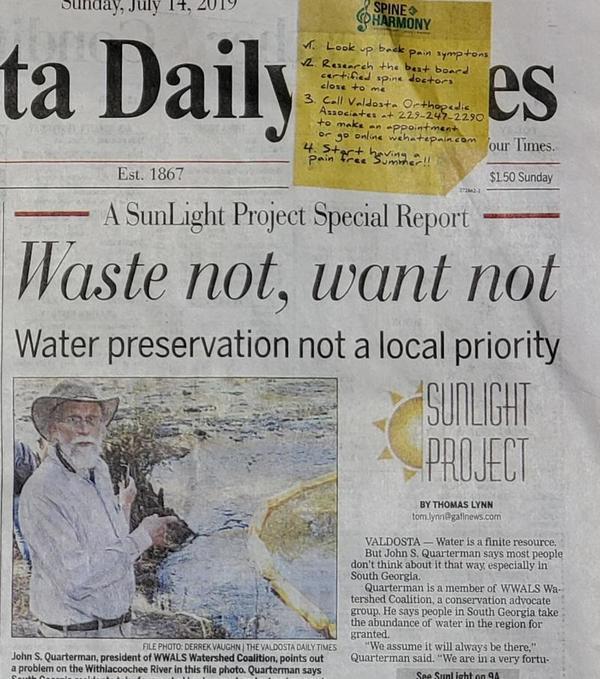 Front page, Sunday, July 14, 2019, Valdosta Daily Times
Some of you may recognize the picture, which shows the boom Sabal Trail put in the Withlacoochee River west of Valdosta after their pilot hole leaked drilling fluid up into the river.

VALDOSTA — Water is a finite resource.

But John S. Quarterman says most people don’t think about it that way, especially in South Georgia.

Quarterman is a member of WWALS Watershed Coalition, a conservation advocate group. He says people in South Georgia take the abundance of water in the region for granted.

“We assume it will always be there,” Quarterman said. “We are in a very fortunate situation here, but that doesn’t mean we can’t do better.”

What prompted the reporter to interview me for this story was Atlanta’s lack of water and lack of water planning. Compared to that, we’re in a very fortunate situation, indeed.

The story notes Valdosta uses only about a tenth as much water as Cobb County. The story notes about 0.4% annual population growth for Valdosta, compared to 10% for Cobb County, and says “Lowndes County didn’t fare much better for population growth.” Actually, I’d consider Valdosta and Lowndes County fared much better indeed for population growth, by not having much of it, and thus not having to contend with the corresponding infrastructure problems. Witness Valdosta still catching up from a decade and more ago when it was growing more rapidly and its wastewater infrastructure was not being updated accordingly.

The story sketches some things each of Valdosta and Lowndes County do to try to get people to conserve water, such as irrigation in the evening, and odd and even irrigation schedules during state-declared droughts.

Everyday people are not the major consumers of the aquifer, he said.

Quarterman said the thirstiest entities in South Georgia are farmers and not governments. Farmers use genetically modified seeds as crops that take more water than normal seeds, he said.

These seeds are engineered to be resistant to most pesticides, but take more water to grow.

According to a 2017 report by the Georgia Water Coalition, when it comes to water use nationally, the two primary economic sectors responsible for withdrawing the most water from state streams and aquifers are the energy and agricultural sectors.

“The future of agriculture in Georgia is inextricably tied to access to clean and plentiful supplies of surface water and groundwater for irrigation purposes,” the report states.

The story compares Georgia to other states, and continues.

Quarterman said there are things everyone can do to make an impact in water use.

The biggest one being using less water for lawn maintenance. This can be done, he said, by collecting rain and using it instead of water provided by the city.

He would like for the city to take similar precautions and further educate the population about what they can do to reduce water use.

The city and county could plant more trees to limit the amount of runoff after a rain. Trees also keep areas of the city cooler during the hotter months, therefore limiting evaporation rates.

Water in the city comes from 400-feet-deep wells and not from capturing surface water such as rain, officials said.

Valdosta gets its water supply from seven wells that are drilled into an underground layer of porous, water-bearing limestone known as the Upper Floridan Aquifer. This limestone layer lies under most of South Georgia and all of Florida.

“Generally, the aquifer is able to provide a prolific supply of good clean water,” officials said. “In Valdosta, the top of the aquifer lies approximately 200 feet below ground surface and the city’s wells are drilled an additional 200 feet into the limestone.”

And those wells got drilled that extra 200 feet because of Withlacoochee River water leaking into them from Shadrick Sink, over on the other side of the river, opposite Cherry Creek.

The Upper Floridan aquifer, which is the sole source of water supply for Valdosta, Georgia, and much of the surrounding area, receives large volumes of direct discharge from the Withlacoochee River through sinkholes in the streambed or off-channel. A highly interconnected conduit system has developed in the Upper Floridan aquifer in this area, which extends at least 15 miles from the sinkhole area. Chloride and isotopic data were used by Plummer and others (1998) to map the percentage of Withlacoochee River water in ground water in the Upper Floridan aquifer (Figure E-1). These data indicate that ground water in parts of the Upper Floridan aquifer contains high percentages of recently recharged Withlacoochee River water. Plummer and others (1998) note that, although the patterns shown in Figure E-1 are generally true over the area, extreme variations can occur at a given location, as would be expected because of the large variations and discontinuities in hydraulic properties in the karst environment and time-varying inflows of river water into the aquifer.

The strong connection between the Withlacoochee River and ground water in the Valdosta area has created concerns about the potential for contamination of ground-water supplies by contaminants in the river. There also are concerns about the effects of natural organic matter in the river water. For example, in the early 1980’s, it was recognized that chlorination of aquifer water produced disinfection by-products in excess of drinking-water standards. This occurred as a result of reaction of chlorine with the high amounts of natural organic matter in the river water recharged to the aquifer.

I discussed that with the reporter, but probably it was too much to fit into the story, which continues.

The Floridan Aquifer in the area of Valdosta and Lowndes County is known as a karst aquifer.

This is an aquifer that has cracks, underground solution channels and caverns. These cracks can provide a route to allow contaminants to enter the aquifer, move about in the aquifer and alter the water supply and can cause special challenges for the city’s water system.

Figure from same USGS study as above.

City officials said most residents get water to their homes or businesses through underground pipes from the Valdosta water treatment plant.

Quarterman reiterated the need for South Georgia as a whole to be appreciative of the water it has and not take it for granted.

“The city could do more to encourage people to think and act differently,” he said. “Valdosta prides itself on being a forward-thinking city. It could certainly be doing more with renewable energy, rainwater capture, using less water for lawns. We’re really fortunate to have the water resources we have. We have to preserve them and be careful about how we use it.”

I also recommended he look at the report by Georgia’s Suwannee-Satilla Regional Water Planning Council, which has projections of population and various types of water use for many of the counties in the Suwannee River Basin in Georgia. Also, the North Florida Regional Water Supply Plan, which, despite its flaws, demonstrates that local water supplies are affected by withdrawals far away, including in Jacksonville and Savannah. Everything around here depends on water, mostly groundwater. Let’s not mess that up.