Georgia Power, local electric cooperatives, Duke Energy, FPL: all are spending on solar power. However, Georgia and Florida remain behind New Jersey and Massachusetts in deployed solar megawatts. It’s an election year, and this should be an issue.

FPL is making a big show of solar power in Florida, but are it and sibling utilities actually moving ahead very fast? Jay Koziarz, miami.curbed.com, 30 July 2018, City vote clears path for retractable ‘solar halo’ atop Bayfront Amphitheater: The urban installation will be one of the largest of its kind in the country Miami city commissioners have backed a move to construct a retractable, ring-like roof covered in solar panels atop the Klipsch Amphitheater at Bayfront Park. The officials waived the city’s competitive bidding requirements to fast-track the project—which they hope will be completed in 18 months and in time for Miami’s February 2020 date to host the Superbowl.

That’s nice, but Florida is still way behind in the Superbowl of solar power deployment.

Private entity Florida Power & Light plan to pay for the addition while Bayfront Park Management Trust would be on the hook for maintenance and operation costs. Revenue from power collected by the array will go directly to FPL, who will pay the city just $10 each year in license fees.

FPL also plans to build a large solar canopy next to the Amphitheater and a number of “solar trees” nearby. Combined, the installations will contain nearly 1,700 individual solar panels generating roughly 500 kilowatts of electrical energy.

Atlanta, GA /PRNewswire/—Georgia Power is continuing to grow renewable energy in Georgia through the Renewable Energy Development Initiative (REDI), originally approved by the Georgia Public Service Commission (PSC) in 2016. The company is now accepting bids for new solar distributed generation (DG) projects through a Request for Proposal (RFP) for more than 100 megawatts (MW) as part of the REDI.

“We are committed to developing cost-effective renewable resources through a competitive bidding process that continues to evolve and improve based on our experience,” said Wilson Mallard, director of Renewable Development for Georgia Power. “Renewable energy is thriving in Georgia and we are excited to begin receiving, reviewing and selecting new projects that provide the most value to our customers.”

Georgia Power is soliciting eligible projects that will range from 1-kilowatt (kW) installations up to 3-MW solar farms. Interested parties are invited to review terms of the RFP and submit projects here by noon on August 15.

The company also encourages customers who do not participate in the REDI program to consider optional programs such as Georgia Power Community Solar and Simple Solar. Community Solar gives residential customers who subscribe the opportunity to earn a bill credit based on actual solar energy production at Georgia Power’s Community Solar facilities. The Simple Solar program is a solar renewable energy credit (REC) purchase program available to all customers that allows participants to claim solar benefits for either 50 percent or 100 percent of their energy usage.

Through programs and projects developed in coordination with the Georgia PSC, Georgia Power is committed to maintaining a diverse generation portfolio while providing all customers with renewable energy options. With 970 MW* of solar capacity currently online, the company continues to have the largest voluntary renewable portfolio in the nation. Through continued development of REDI, as well as other solar projects and programs, Georgia Power expects to add up to 1,600 MW* of additional renewable capacity by the end of 2021.

To learn more about Georgia Power’s various solar programs, as well as solar tools and resources for customers, visit www.GeorgiaPower.com/Solar.

* REC Disclaimer: Georgia Power purchases only the null energy output from some renewable generating facilities that have contracted to sell that energy to Georgia Power. Ownership of the associated RECs is specified in each respective power purchase agreement. The party that owns the RECs retains the right to use them.

100 megawatts sounds like a lot, even after Southern Company CEO Tom Fanning reminded everyone at the Stockholder Meeting in May that SO is not spending nearly as much on solar and wind this year as last. And 100 MW is only 10.3% of the 970 MW Georgia Power says it has online, so that’s not much of a growth rate. Plus Georgia and Florida lag behind New Jersey and Massachusetts in deployed solar power. Remember that next time you hear FPL claim Florida is too cloudy for solar power.

FPL is currently building four solar parks of 74.5-MW each as part of a plan to add more than 3,200 MW of photovoltaic (PV) capacity in Florida over the coming years….

NextEra Energy Resources added 1,082 MW of renewable energy projects to its backlog during the past few months, including 300 MW of wind, 692 MW of solar and 90 MW of battery storage schemes. Its wind repowering backlog expanded by an additional 535 MW in Q2.

It’s good to see FPL finally moving ahead in solar power, but it will take more than that to catch up with cold northern states.

DEF’s current forecast, supporting the Base Expansion Plan includes over 700 MW of DEFowned solar PV to be under development over the next four years and over 1,000 MW over the 10 year planning horizon. As with all forecasts included here, the forecast relies heavily on the forward looking price for this technology, the value rendered by this technology, and considerations to other emerging and conventional cost-effective alternatives, including the use of emerging battery storage technology.

So basically DEF is deplaying that 700 MW of PV because of the settlement for not building the Levy Nuclear Plant, and has few solar plans after that.

Depending upon the mix of generators operating at any given time, the purchase of renewable energy may reduce DEF’s use of fossil fuels. Renewable energy sources making firm commitments to the company can also defer or eliminate the need to construct more conventional generators.

Project, interconnection, and avoided cost discussions with renewable (solar) and combined heat and power developers who are also exploring distributed generation options have increased dramatically. The majority of interest is coming from solar photovoltaic developers as the price of photovoltaic panels has decreased over time. The cost of this technology continues to decrease and subsidies remain in place. This increase in solar activity is evident in the number of interconnection requests which now total over 7,800 MW of solar PV projects alone. As the technologies advance and the market evolves, the Company’s policies will continue to be refined and compliant.

Those 700 MW and 1,000 MW numbers were just for solar PV directly owned by DEF. If DEF doesn’t move ahead with more of those, its own Plan indicates other people will forge ahead anyway. And DEF can read price curves as well as anybody else, and knows the price of solar PV is only going to continue going down, while batteries are coming along faster and cheaper than predicted.

Page 3-1 indicates DEF needs to do something faster about solar PV:

Less, actually, because on page 3-2 says, based on the Hamilton Solar Farm:

In this plan, DEF has assigned this DEF owned solar PV generation an equivalent summer capacity value equal to 57% of the nameplate capacity of the planned installations. 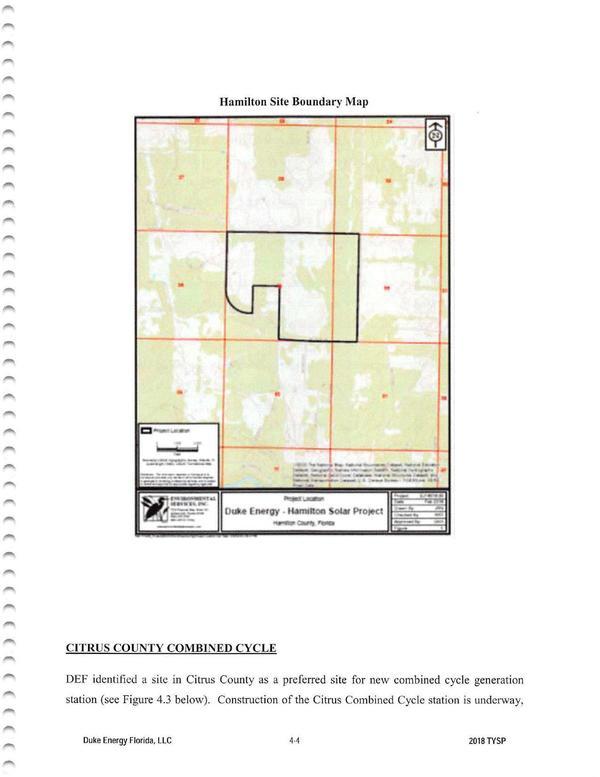 COLUMBIA — Deep-pocketed power companies outspent the solar industry nearly $3 to $1 as part of an intensive lobbying effort during an S.C. legislative session that included efforts to curb rooftop solar’s expansion in the state.

Electric utilities spent nearly $523,000 from January through May to hire more than three dozen lobbyists to advocate for them at the State House as lawmakers decided what to do about solar incentives and a failed nuclear project.

Those utilities also poured more than $300,000 in contributions into state election campaigns through May of this year, largely to Republican incumbents, according to disclosure reports compiled by the National Institute on Money in Politics.

The solar industry, which saw the nuclear fiasco as an opportunity to expand its footprint in the state, was outspent badly and lost. It spent more than $177,000 to hire 11 lobbyists during the 2018 legislative session.

“Solar consumers are in a David versus Goliath battle with the big power monopolies,” said Matt Moore, chairman of the Palmetto Conservative Solar Coalition industry group.

This is no news to people in Florida, who a couple of years ago saw through a utility and fossil fuel backed fake solar amendment and voted it down. Beware: the same companies will be defending their deep pockets again.

Meanwhile, if the big utilities won’t get the job done, others will. David C. Wagman, IEEE Spectrum, 27 July 2018, As Economics Improve, Solar Shines in Rural America: Declining costs have helped some of the country’s smallest electricity providers expand their use of solar in highly innovative ways,

A five-year effort by electric cooperatives to expand the use of solar energy in rural parts of the United States is coming to a successful conclusion.

Under the Solar Utility Network Deployment Acceleration (SUNDA) program, which was run by the National Rural Electric Cooperative Association (NRECA) under a cost share arrangement with the U.S. Energy Department, rural electric co-ops are on track to own or buy 1 gigawatt of solar power generation capacity by 2019.

That’s a good start. Now double that in the next two years, and again, and again, and we’ll get somewhere. Somewhere is deploying enough sun, wind, and battery power to shut down all fossil fuel and nuclear plants, eliminating their use of cooling water, their pipelines, their eminent domain, and their pollution.