Dear pipeline companies: if you gouge through a rock-star farmer’s world-record-holding soybean fields, you may find he gets national coverage.

Randy Dowdy’s soil death is no mystery, insists the Georgia producer, and now a federal inspection report appears to back his claims of soil damage on record-breaking farmland due to pipeline construction. A letter (Feb. 6) from the Federal Regulatory Commission (FERC) to the Sabal Trail Pipeline Project describes “topsoil and subsoil mixing” on Dowdy’s farming operation, yet significantly does not address issues of noncompliance. 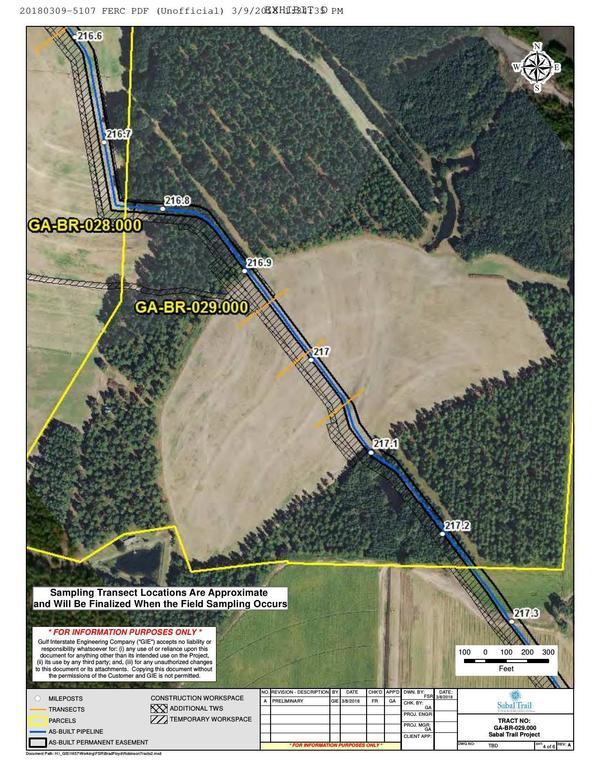 Dowdy signed an easement in 2015, giving Spectra Energy right-of-way across a mile of his land for the Sabal Trail natural gas pipeline. The project section on Dowdy’s land in Brooks County, Ga., began after fall harvest in 2016, and was slated for completion the first week of 2017, but when rains fell during the third week of January, construction remained ongoing and the ground was relatively unprotected. Dowdy lost 40-plus acres of topsoil and decades of yield potential on record-producing ground (171.7 bu. soybeans and 521 bu. corn).

“The rainfall wasn’t even anything exceptional. We’re only talking about 4” to 5” of rain stretched over a few days,” Dowdy describes. “We’re in a tropical storm area and this wasn’t even close to what we often get. Sabal’s own BMPs called for the capability to handle a 25-year rain event and they shouldn’t try to call normal rainfall an act of God.”

Dear landowners, back in 2014 I spelled out Why accepting a natural gas easement is a bad deal. Sure, the pipeline company may get it anyway through eminent domain, but you may get a better deal, plus if enough landowners refused to sign the pipeline might not happen.

The AgWeb article continues with details of the soil mixing and why it is illegal, then:

Initially buoyed by Turpin’s FERC letter and its description of “topsoil and subsoil mixing,” Dowdy was quickly frustrated by what he calls a “huge hole” in the text. “The letter says FERC will allow Sabal Trail to come up with its own plan and bring in its own soil scientist onto my land? That’s like letting the fox in the henhouse and makes no sense. The plan and soil scientist should be independent of Sabal Trail. Independent,” he emphasizes.

“I’m thankful to Terry Turpin and Danny Lafoon because this is the first step toward hopefully getting resolution for me and more landlords in the same position, but I’m still confused as to how this doesn’t meet the threshold of noncompliance. I sincerely appreciate FERC’s investigation, but it’s not reasonable for the next step to involve Sabal Trail in any way. I just want to figure out why there isn’t 100 percent independent oversight of the next phase,” Dowdy continues.

Lafoon’s FERC field inspection report (Nov. 14, 2017) states in conclusion, “…topsoil and subsoil mixing have occurred. However, the extent of the mixing is currently unknown on the Dowdy, Robinson, and Jones Properties. In addition, a problem area was identified because Sabal Trail has not maintained erosion control devices and has not removed construction debris in several locations.”

However, in the report summary, FERC notes no areas of noncompliance regarding Sabal Trail actions. “The inspection report backs up what I’ve been saying since the very beginning about my soil getting mixed, but the same document says Sabal is in compliance with every single regulation,” Dowdy exclaims. “How can Sabal ruin my land and still be in compliance?”

(FERC didn’t respond to a Farm Journal request regarding the inspection report on Dowdy’s land.)

Sabal Trail has responded with a two-pager it calls a “plan”, with a one-page cover letter and six pages of maps.

The AgWeb articles ends with Randy Dowdy getting fired up about cases other than his own:

Dowdy implores producers to carefully assess soil damage and consider making a formal filing: “Any farmer associated with a pipeline or gas line anywhere, and particularly the Sabal Trail gas line, needs to do what Ronald Reagan said, ‘Trust but verify,’ that your property isn’t damaged. You may have the exact same problems as me due to shoddy workmanship, but don’t know it yet.”

Yield on Dowdy’s damaged acreage took a severe dip in 2017, dropping 60% to 80% in the areas where erosion or commingling of soil occurred, he says: “You could walk in my field and literally see to the inch where yields jumped up and were higher out of the damaged area. I used all the management from my experience and used every bit of care I could, but I need a lifetime to restore my soil.”

If your land was invaded by Sabal Trail, consider filing.

If you were lucky enough not to be in the path of this pipeline, that doesn’t mean you are not affected. The $4 billion wasted on this 20th-century fossil fuel boondoggle could have bought more electricity through solar panels, with no pipelines, no eminent domain, no ruined fields, and no risk to our drinking water or public safety.