The Commission should decline the Applicants’ invitation to subvert the Court’s determination that the Project cannot operate pending compliance with NEPA. 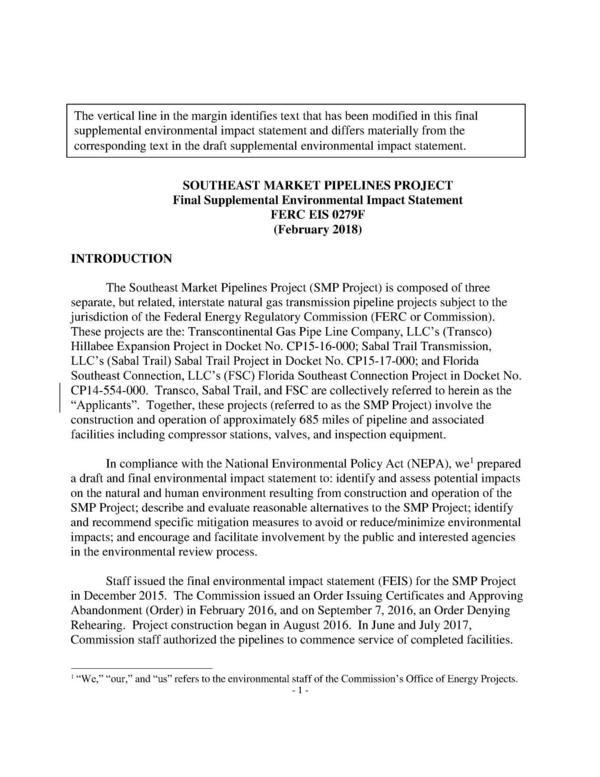 It’s 136 pages long, so there is no way anyone can thoroughly review it before tomorrow, which is when the Applicants in their Request asked FERC to issue certificates.

Here is an example of how much it paid attention to objections. On page 74 it marks this passage from the Eight Riverkeepers letter as NGO4-6:

Thus all three of FPL’s allegations of need for Sabal Trail have been disproven. All that is left is that Sabal Trail has customers. That is not enough to meet FERC’s statutory duty to take into account public detriments, which FERC has failed to do by not producing an adequate SEIS.

As for comparing pipelines to solar power:

NGO4-4 As directed by the court, we provided estimates for downstream GHG emissions as well as context. An alternatives analysis of options for generating electricity is outside the scope of this final SEIS.

NGO4-3 There is nothing in the record demonstrating that gas from the SMP Project would be delivered to an LNG export facility. Furthermore, our analysis assumed full burn regardless of the end-user.

Then the analysis was wrong, because a lot of methane leaks. And LNG export is also relevant because nobody should have had to give up easements through federal eminent domain for LNG export.

NGO4-2 The final SEIS at 3 states that the SMP Project would have the potential to increase the flow of natural gas into Florida by 1.1 billion cubic feet per day The need for the SMP Project was considered in the Commission Order.

Yes, we quoted that italicize potential, and FERC’s answer does not address that it’s not happening.

Wrong list of coal plants to be “modernized” in the DSEIS?

That does not answer the point in the Riverkeepers’ letter, that those are not the same plants as FPL used to sell Sabal Trail to FPSC and FERC.

FPL is deeply concerned that the denial of rehearing by the DC Circuit of its decision vacating the underlying cettificates for the SMP Project will result in a disruption of natural gas service to FPL. Since the SMP Project entered service, FPL has used this capacity during its peak demand periods to serve its retail and wholesale customers. FPL utilized all or nearly all of its capacity from the SMP Project’s in-service date through October 2017. Since November 2017, it has relied on the SMP Project during times of high demand, such as during the recent cold weather in January 2018.

Two days in January hardly counts as needing a third big pipeline into Florida. According to accuweather, it was actually colder in Orlando on January 18, 2018 than on January 4. Why did FPL use less gas then?

The ability to use these pipelines during cold weather not only helped facilitate FPL meeting its native load requirements, but also provided a significant reliability benefit within the region as FPL was able to assist other entities experiencing extreme cold weather and high electric demand.

Solar panels and batteries would provide more reliability, like FPL’s parent NextEra just bragged about in its Quarterly Earnings Report.

In fact, FPL is greatly concerned that without the SMP Project, it will be unable to provide this reliability service to other utilities in Florida during the remainder of the winter season and the upcoming summer season. In short, the SMP Project promotes and enhances resilience in the southeast consistent with the Commission’s policy directives.

It was also colder in Orlando in December, and for longer. How did FPL and Florida manage to survide then?

This is the best part:

While the November through March period in Florida typically brings mild weather that drives lower system demand and lower utilization of pipeline capacity, peak demand can occur at any time, as evidenced by the cold weather events that have already occurred. Periods of warm or even hot weather are also not uncommon as early as March.

There was also extreme cold in Orlando in late November, yet FPL did not get much gas from Sabal Trail then.

Here it is in full:

Late last week the U.S. Court of Appeals for the District Of Columbia Circuit issued a decision not to revisit the August court decision related to Sabal Trail Transmission. That original ruling had criticized the lack of consideration of the downstream effects of the natural gas pipeline.

Our fragile and high demand waterways, violation of personal property rights, the sensitivity of the Floridian aquifer system, the Karst topography, all natural resources affected in the area from potential leaks deserve careful consideration and protection especially since this is being done for a company that has no customers in our State and possibly no customers in our country. I strongly oppose the granting of another certificate of any kind for Sabal Trail Transmission. Due to the potential and likely damage to the ground and surface waters of our state.

FERC Accession Number 20180205-5151, “Answer of Sierra Club in Opposition to Applicants’ Request for Expedited Issuance of Order on Remand Reissuing Certificates, or in the Alternative, Abbreviated Application for Temporary Emergency Certificates under CP14-554-000, et. al.”

The main letter is only eight pages, but the additional material runs more than 100 pages. This in the main letter seems the minimum FERC should do if it has any pretense of retaining legitimacy:

While Sierra Club contends that either denial or modification of the certificates is warranted, at a minimum, the Commission should not issue new certificates until thirty days after publication of notice of the final SEIS in the Federal Register. See 40 C.F.R. § 1506.10(b)(2).

As for the “emergency” the Applicants allege:

And economic disruption is not an “emergency” within the meaning of the Commission’s rules. The D.C. Circuit Court of Appeals rejected the same arguments made by Applicants here regarding “disruption,” including their claim that consumer service allegedly would be interrupted.

As set forth below, Applicants own records demonstrate that halting the flow of natural gas through the pipeline is technically and economically feasible without any interruption of service to consumers, hence operation of the Project can be suspended while the Commission complies with the Court’s mandate. The Commission should decline the Applicants’ invitation to subvert the Court’s determination that the Project cannot operate pending compliance with NEPA.

Sierra Club notes FERC just issued the FSEIS, and reserves right to comment further on that. So should we all.

Meanwhile, shut it down!