Paddling down the Withlacoochee River from Nankin to Mozell Spells, the remains of the Valdosta Railway Bridge mark on the right bank the north end of the Four Freedoms Trail, one of the few hiking trails on the Withlacoochee and Little River Water Trail (WLRWT): 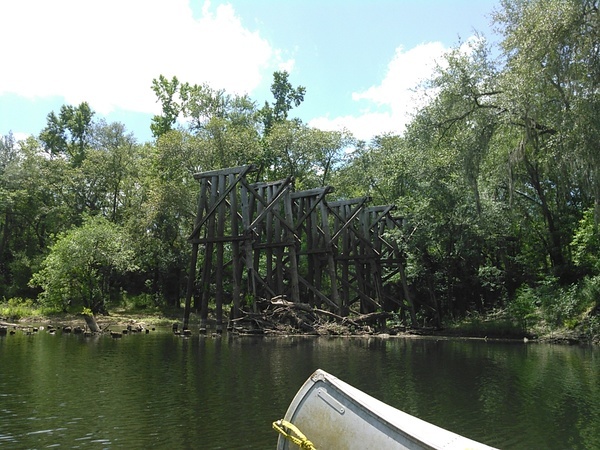 The Four Freedoms Trail in Madison County was constructed as a joint effort between the County, Suwannee River Water Management District, the Office of Greenways and Trails, and the Florida Department of Transportation. As a result, the Trail was created without using any of Madison County’s ad valorem tax dollars. The 12 mile recreational trail extends north from the city limits of Madison to the Withlacoochee River at the Florida-Georgia border. People can enjoy walking, biking and horseback riding along the paved trail, which provides covered rest areas along the way. 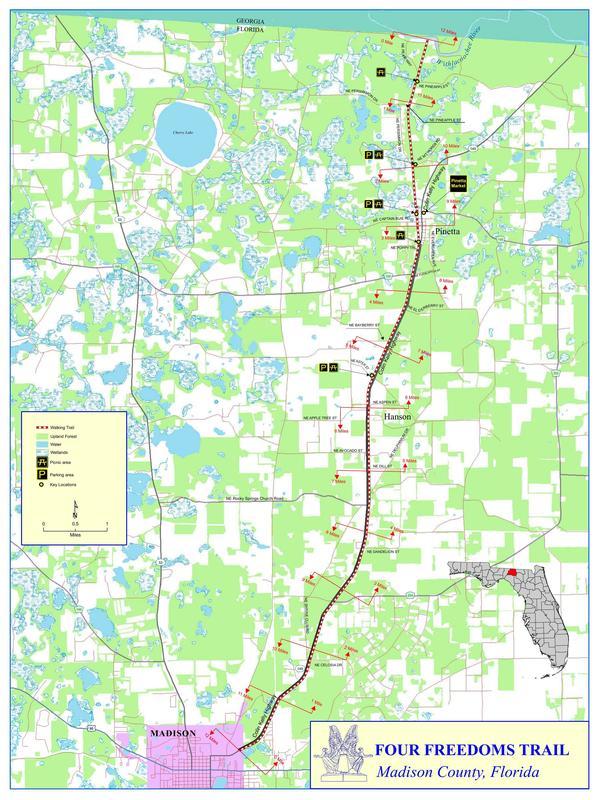 You can get to the railroad bridge by land from NE Peppermint Trail, Pinetta, Florida, and we have met people paddling from there, so you can put in there. The trail is public land, owned by Madison County.

According to Trouble Afoot, 8 December 2008,

There’s a picnic table under a shelter at the south end of the trail and an observation deck overlooking the river. The opposite bank of the river is Lowndes County, Georgia. Part of the old railroad trestle that carried the trains across the river still stands on the Florida side of the Withlacoochee. This is a pleasant spot to stop and eat a snack, watch birds, or fish. Or you could stare at the water, and imagine what an amazing ride you could have if the trail continued across the river and up the old rail grade into Valdosta.

Or bring a boat and paddle on the river, for an amazing ride over shoals and past springs. 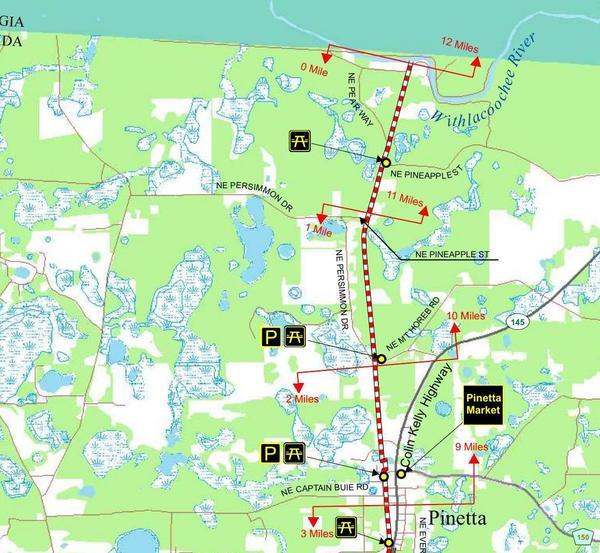 Here’s what is apparently a typical section of the trail: 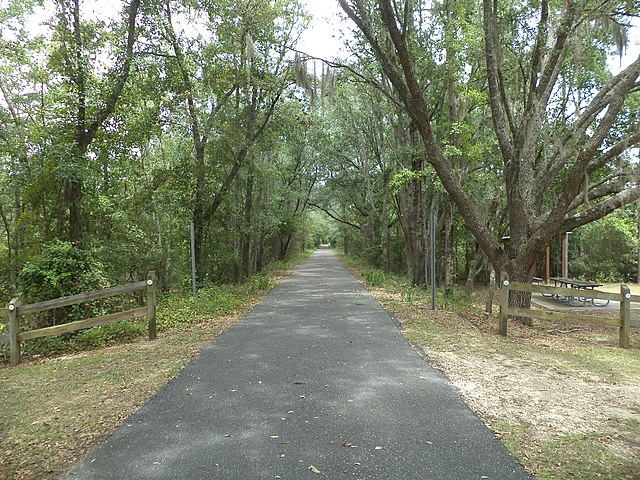 There is a public restroom in Pinetta, and parking near the intersection of NE Mount Horeb Road (CR 125) and Persimmon Drive, on the north end of town, 2.7 miles from the river.

The trail is on the former right of way of the Valdosta Railway, formerly Valdosta Southern Railway (VSO), formerly Georgia and Florida Railroad, built in the late 19th century as Florida Midland and Georgia Railroad. The same Valdosta Railway is still in use from Valdosta to Clyattville, Lowndes County, Georgia. Much of the rest of Georgia and Florida Railway is still in use, from Albany, to Sylvester, Thomasville, Adel, Quitman, Georgia and Greenville, Perry, and Foley, Florida.

According to the Lowndes County Historical Society and Museum, Railroads:

The third railroad through Valdosta was the Florida, Midland and Gulf. It earned the nickname “Spool Cotton Road” for being built by J.&P. Coats, the spool thread factory. The line eventually became the Valdosta Southern and had a building on South Patterson street.

There are more pictures and video on The Four Freedoms Trail in Madison Florida by Charles Rinehart.

None of the above sources say, but “The Four Freedoms” most likely refers to the State of the Union address by president Franklin D. Roosevelt, January 6, 1941, in which he said:

In the future days, which we seek to make secure, we look forward to a world founded upon four essential human freedoms.

The first is freedom of speech and expression—everywhere in the world.

The second is freedom of every person to worship God in his own way—everywhere in the world.

The third is freedom from want—which, translated into world terms, means economic understandings which will secure to every nation a healthy peacetime life for its inhabitants—everywhere in the world.

The fourth is freedom from fear—which, translated into world terms, means a world-wide reduction of armaments to such a point and in such a thorough fashion that no nation will be in a position to commit an act of physical aggression against any neighbor—anywhere in the world.

That is no vision of a distant millennium. It is a definite basis for a kind of world attainable in our own time and generation. That kind of world is the very antithesis of the so-called new order of tyranny which the dictators seek to create with the crash of a bomb.

There is a clue to this relation in the title of the trail map: there’s a drawing of the Four Freedoms Monument in Madison, Florida, about which the Museum of Florida History says:

Located in City Park on U.S. HWY 90 in Madison, opposite the Madison County Courthouse.

The Four Freedoms Monument dervies its name from remarks made by President Franklin Roosevelt in his 1941 Annual Message to Congress. In that speech, President Roosevelet spoke of freedom of speech and expression, freedom of worship, freedom from want, and freedom from fear everywhere in the world. These became the ideals of American policy.

Designed by Walter Russell and funded by the Women’s National Institute, the monument dedication occurred June 14, 1944. This tribute is part of the Florida Historical Markers Program. In August 2000, the U.S. Post Office in Madison was renamed to further honor Captain Kelly.

The Four Freedoms Monument was commissioned by President Franklin D. Roosevelt following his articulation of the “Four Freedoms” in his 1941 State of the Union Address. This was yet before the Attack on Pearl Harbor and the participation of the United States in World War II. Roosevelt felt that, through the medium of the arts, a far greater number of people could be inspired to appreciate the concept of the Four Freedoms….

The statue was created by sculptor Walter Russell later that year, and was dedicated in 1943 before a crowd of 60,000 people at Madison Square Garden in New York City. It was dedicated to Colin P. Kelly, one of the first recognized American heroes of World War II. On June 14, 1944, the monument was re-dedicated in Kelly’s hometown of Madison, Florida, with a speech by Governor Spessard Holland.

That monument in the middle of Madison is a bit beyond the southern end of the Four Freedoms Trail on the northeastern edge of town, but clearly is part of the trail in spirit.