Not just one week anymore, more than two weeks: for seventeen days or more than half a month Sabal Trail shipped no gas, and it’s at less than ten percent of its stated operational capacity today.

The graph really does depict all five Sabal Trail compressor station sites (Alexander City, Albany, Hildreth, Dunnellon, and Reunion) in order after Sabal Trail’s source of fracked methane at Transco Station 85, the same ones you can see on their map below. The five Sabal Trail sites track so closely together, within single digits, that their lines are not distinguishable on the plot. 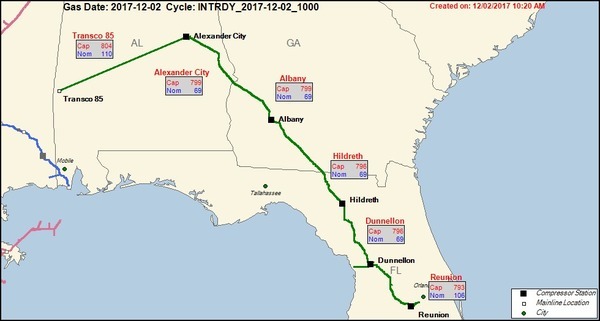 Which illustrates something really basic about Sabal Trail: it provides no gas to Alabama nor Georgia nor even Florida before it gets to power plants in south Florida which burn that fracked methane and generate greenhouse gases. So all the people in Georgia and Alabama who were forced through FERC-enabled federal eminent domain to give up easements get no benefit other than a wildly-inadequate one-time payment. And landowners in Florida, unless they are getting electricity from FPL or Duke Energy, also get nothing but more pollution.

Sabal Trail’s investors may expect to get profits from shipping fracked methane overseas through LNG export. Why that should justify federal eminent domain is something FERC has never explained. 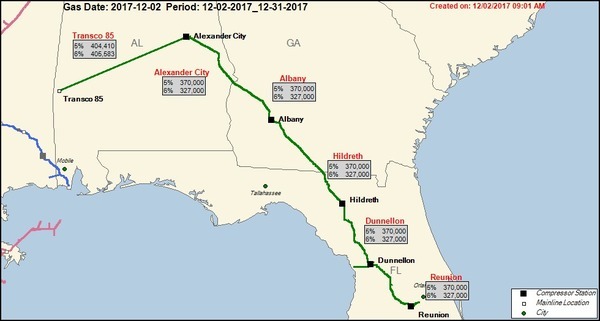 After Sabal Trail’s Unsubscribed Capacity shot up by 300,000 Dekatherms a day (DKH/day) on November 14th, it has not gone back down. And, once again, that 300,000 DKH/day number exactly matches the amount Duke Energy had contracted for, with a “Contract Primary Term Expiration Date” thirty days before November 14th.

Also, the 69 MDTH/day Sabal Trail says is nominated today is a tad less than the 400 MDTH/Day FPL has supposedly contracted for.

What’s wrong, Sabal Trail? Sinkholes got your pipeline? Or customers got cold feet?

Maybe there’s a reason FERC Chairman Neil Chatterjee is scared of that Sierra Club and Riverkeepers lawsuit and the other pipeline opposition.