While Alabama is thinking about it (actually, Alabama already does it) and Georgia requires an open records request with slow response (since 2018-12-21 Georgia now posts spills),

Florida has already required and is publishing timely notices of spills, and more recentlyh a map of the most recent 30 days of spills!

Among them, surprisingly few in the Suwannee River Basin from Hurricane Irma: three in Baker and Bradford Counties from The Chemours Company, and two from Camp Blanding. 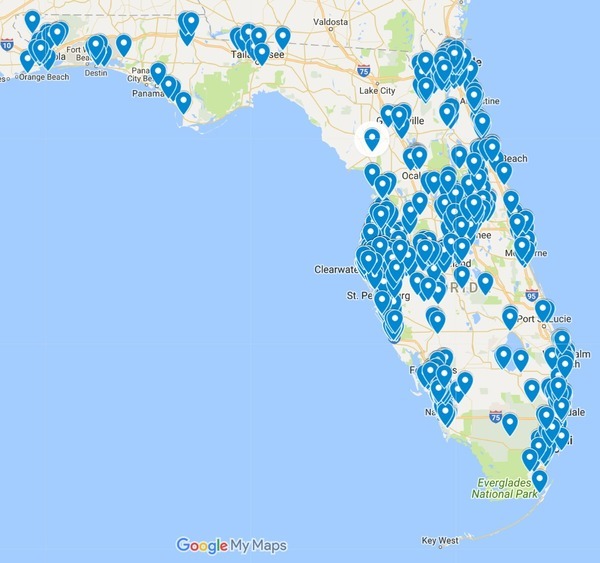 On May 3, 2017, the Florida House of Representatives unanimously voted in favor of the “Public Notice of Pollution Act,” which had already unanimously passed in the Florida Senate as Senate Bill 532. Before final passage SB 532 became part of SB 1018. Governor Scott had previously asked the Florida Legislature to approve and send him a pollution notification bill. He now has announced his intention to sign the bill, which upon enactment will be codified at Sections 403.076-403.078, Florida Statutes, with an effective date of July 1, 2017.

The Act does not expand the types of pollution events that must be disclosed to the Florida Department of Environmental Protection (“FDEP”), but rather provides a significant expansion in how those events must be reported. The Act requires an owner or operator of a facility that has a “reportable pollution release” to provide notice of such a release to the FDEP within 24 hours of discovery, and to report again within 24 hours if such owner or operator subsequently discovers that the release has migrated beyond the facility’s property boundaries. Within 24 hours of such notice, the FDEP must provide a notice of the release by posting it on a designated public website and emailing it to a list of local government agencies, news media, and similar entities as established in the Act, as well as to anyone else who asks to be on an email list for such notices. The FDEP has authority to adopt rules to implement the Act.

This reporting requirement is a significant expansion on current law to the extent that it expands the procedure for how pollution events are reported to the public. Under current law, reports of pollution events to the FDEP are public records, but they usually are only filed with the FDEP, and only become really “public” if someone makes a public records request for them, assuming that person knows what to ask for. In the Mosaic case discussed below, the company reported a groundwater discharge to the FDEP, but local residents were unaware of the event for many weeks simply because no one knew to ask for the reports. As the result of passage of the Act, it is very likely that the locals would know about it much more quickly, because of both the much wider distribution of notice and the two 24-hour reporting requirements.

And FDEP now has a Pollution Notice web page:

In compliance with Section 403.077, F.S. and the public interest, the Department of Environmental Protection is making available any Notices of Pollution that it has received. This information is available below.

This information is presented as provided by the reporting entity. The Department of Environmental Protection is not responsible for the accuracy of any information submitted.

That website’s data is downloadable in Excel, which has latlongs in it. Here’s a google map:

I hope somebody will tell me there’s a way to get FDEP’s Map Direct to show this stuff as a layer. As it is, each point on the google map above has a link into Map Direct for that one point.

Spills in the Suwannee River Basin

Meanwhile, there were surprisingly few pollution reports from the Suwannee River Basin in Florida: none actually during Hurricane Irma. 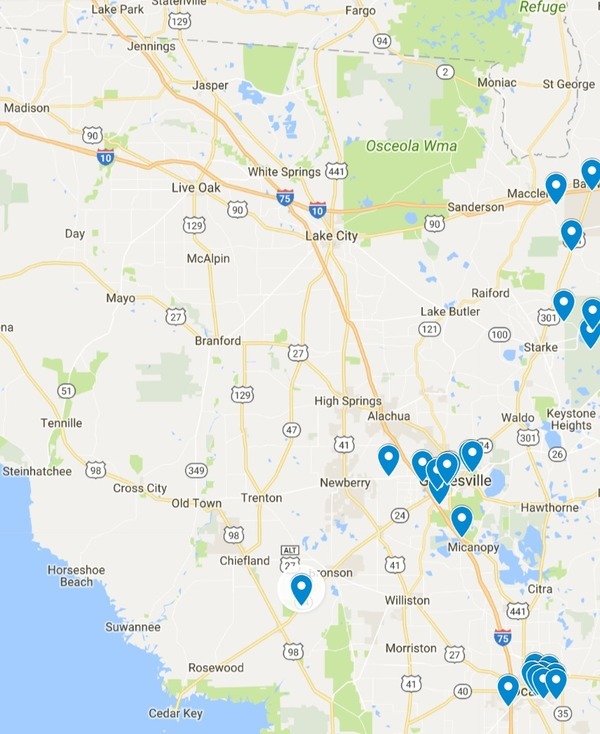 On 18 September 2017, there were three reports from Baker and Bradford County by The Chemours Company:

There’s is a logging truck incident shown between Bronson and Otter Creek, but that was back in August:

There’s also FlaWARN, of which Suwannee Riverkeeper is an Associate Member.

Georgia could try to catch up with Florida and Alabama.