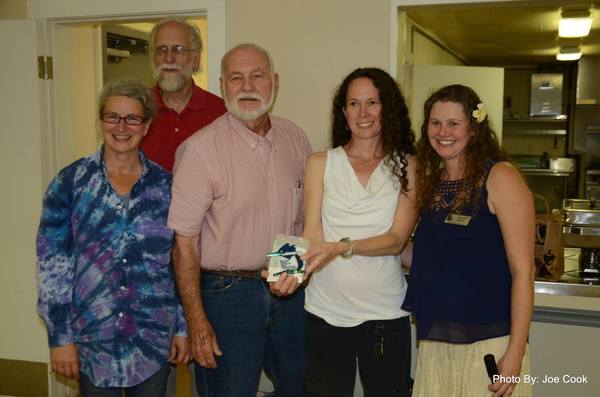 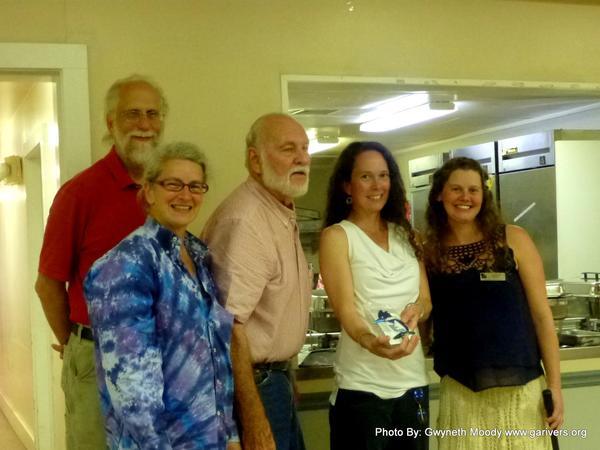 Here is the writeup on the origins of WWALS we sent GRN at their request before the event. Please note that WWALS territory currently includes 33 counties: 24 in Georgia and 9 in Florida, from Cordele in the northwest and the Waycross in the northeast of the Suwannee River Basin to the Gulf of Mexico. 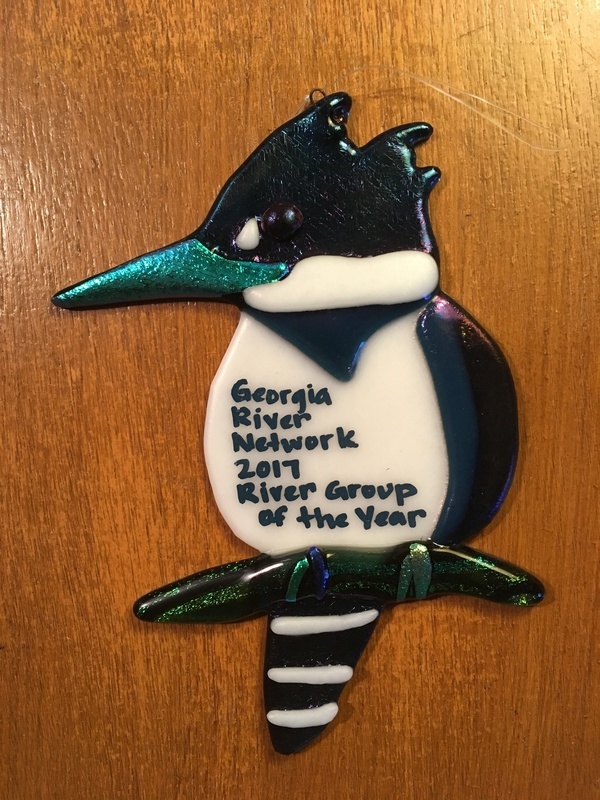 The GRN award, made by Gwyneth Moody’s mother

In 2009 (and again in 2013) south Georgia had a 700-year flood, in which Valdosta’s Withlacoochee Wastewater Treatment Plant (WWTP) and many manholes overflowed into the river. Most of the water came from upstream, and complaints echoed all the way downstream on the Suwannee River to the Gulf of Mexico.

John and Gretchen Quarterman, Carolyn Selby, Barbara Stratton, and others in Lowndes County, GA through Lowndes Area Knowledge Exchange (LAKE) noticed and blogged that WWTP was in a flood plain, that clearcutting and impervious cover had caused much of the flooding, and that some bridges were closed that shouldn’t have been, because of deadfalls and finger-pointing between the county and state.

In Tift County, Bret Wagenhorst has been organizing free paddle trips on the regions blackwater rivers, cypress lakes and swamps for around 15 years, to educate folks from all over the region, the country and the world about the beauty and biology of the local rivers. Folks from as far away as California, New York, Ohio, Pennsylvania, Canada, China, France, Germany, India, Norway, Russia, Spain, and Switzerland have been introduced to area waterways through these outings. He has organized annual GA Rivers Alive affiliated cleanups on the Alapaha and Little Rivers for at least the past 10 years, getting local organizations such as the Boy Scouts and Keep Tift Beautiful involved in helping to remove trash from along these waterways and tried to build grassroots support for regional waterway advocacy. In 2010, also in Tift County, Dave Hetzel, Helen Rogers, and Karen Hendrix started a group called Water Matters and held a symposium to address the dropping water table due to agricultural use, land-use practices in towns and fields, and energy generation, and also had speakers talk about the value of waterway based eco-tourism to rural economies.

Several of us noticed there was no Riverkeeper, and the biggest population centers in the entire Suwannee River Basin are Valdosta and Tifton, and Lowndes and Tift Counties, Georgia.

In 2010 Leeann Culbreath of Tifton and Janisse Ray of Reidsville (a founder of Altamaha Riverkeeper) held the first South Georgia Growing Local conference in Tifton; those have become annual, with a series in Lowndes County organized by Gretchen Quarterman, most recently in January 2017. At a local food gathering about 2010, the Quartermans encountered Janisse Ray and Flint Riverkeeper Gordon Rogers and asked them how hard it is to form a Riverkeeper. They answered: “It’s easy!”

So in 2012 bi-weekly meetings started in Adel, quickly drawing many of the above-mentioned people plus Garry Gentry from Tifton. In June 2012 WWALS incorporated, with first president Dave Hetzel, and the first speaker at the early monthly board meetings was the Stormwater Manager for the City of Valdosta. Helen Rogers handed the Water Matters membership list over to WWALS before she moved away. LAKE continues, with Gretchen Quarterman videoing and speaking at Valdosta City Council and Lowndes County Commission meetings and WWALS also using that video about coal ash, sewage, and other water issues. In 2016 WWALS helped Leeann Culbreath organize coal ash meetings in Tifton and Valdosta to help Georgia Water Coalition.

In June 2013 WWALS board members Garry Gentry and John S. Quarterman testified for solar power at the Georgia Public Service Commission, assisting with the historic July 2013 PSC decision to require Georgia Power to buy twice as much solar power as it wanted; the PSC did that again in 2015, leading to Georgia becoming the fastest-growing solar market and to Georgia Power in 2015 backing a change to Georgia law that facilitates solar power financing.

Meanwhile in 2010, a local landowner tried unsuccessfully to close the only Lowndes County access to the Alapaha River. In 2013 he tried again and WWALS helped locals from Lowndes and Lanier Counties organize a petition to keep it open, and WWALS asked for a park on the river if it closed. Lowndes County closed it, but soon county voters approved SPLOST revenues to build an Alapaha River Boat Ramp at US 84. Meanwhile, April Huntley joined the WWALS board and Chris Graham became the Chair of a new Alapaha River Water Trail Committee to implement a small Turner Regrant through Georgia River Network (GRN).

Also in June 2013 WWALS learned Spectra Energy was already sending letters to landowners even before it won the bid to FPL for what became the Sabal Trail fracked methane pipeline. Soon that and the water trail and outings drew in Chris and Deanna Mericle and Dennis and Dottie Price from Hamilton County, Florida. Chris Mericle joined the WWALS board and became the chair of a new Withlacoochee and Little River Water Trail Committee.

Deanna Mericle wrote the first draft of the WWALS petition against the Sabal Trail permit by the Florida Department of Environmental Protection (FDEP) that produced the four-month legal case WWALS vs. Sabal Trail & FDEP with a three day hearing in Jasper, FL in October 2015. We did not win, but the FDEP testimony was contradicted one year later when on a Southwings overflight of the Withlacoochee River WWALS president John S. Quarterman detected one of the things WWALS expert witness Dennis Price P.G. had warned about: a frac-out of drilling mud up from Sabal Trail’s pilot hole into the river, plus a sinkhole at the Lowndes County drill site. WWALS since discovered Sabal Trail burning illicit materials without a permit in Brooks County, and has encouraged others to report violations in Georgia and Florida.

Through opposition to Sabal Trail and Valdosta sewage spills and investigation of agricultural purchases, WWALS gained members in Suwannee County, FL including Debra Johnson and Eileen Box, as well as in Columbia, Gilchrist, Levy, Madison, and other Florida counties, plus Thomas County, GA.

WWALS monthly outings steadily cultivate new members from the northern (Coffee County, GA) to the southern (Dixie County, FL) edges of WWALS watersheds, plus farther away. Phil Hubbard of Valdosta has joined the WWALS board and is the current Outings Committee Chair. Outings including the annual BIG Little River Paddle Race organized by Bret Wagenhorst at Reed Bingham State Park, which drew agricultural pesticide professional Tom Potter. Potter, who works in Tifton and lives in Valdosta, has since joined the board.

In June 2015 WWALS became a Waterkeeper Alliance (WKA) Affiliate, with the aim of raising funds to hire staff, and Gretchen Quarterman as acting Executive Director. In July 2015 WWALS added the upper Suwannee River watershed from the west half of the Okefenokee Swamp to the Withlacoochee River confluence, thus connecting the Alapaha and Withlacoochee Rivers.

WWALS, with its project Suwannee Riverkeeper, continues to advocate for conservation and stewardship of the Withlacoochee, Willacoochee, Alapaha, Little, and Suwannee River watersheds in south Georgia and north Florida through education, awareness, environmental monitoring, and citizen activities. We just do it a bit faster now, since we’re raising funds for paid staff and other activities.

Here are the previous winners.