We got smoked here in western Lowndes County yesterday and this morning 60 miles from the West Mims fire as it went up to 107,846 acres in and around the Okefenokee NWR. Many of the fire-fighting numbers went down since last post: remember, the goal is not to put the fire out, rather to contain it. As I write, a big storm just went over here heading that way, so maybe mother nature will take a hand today. 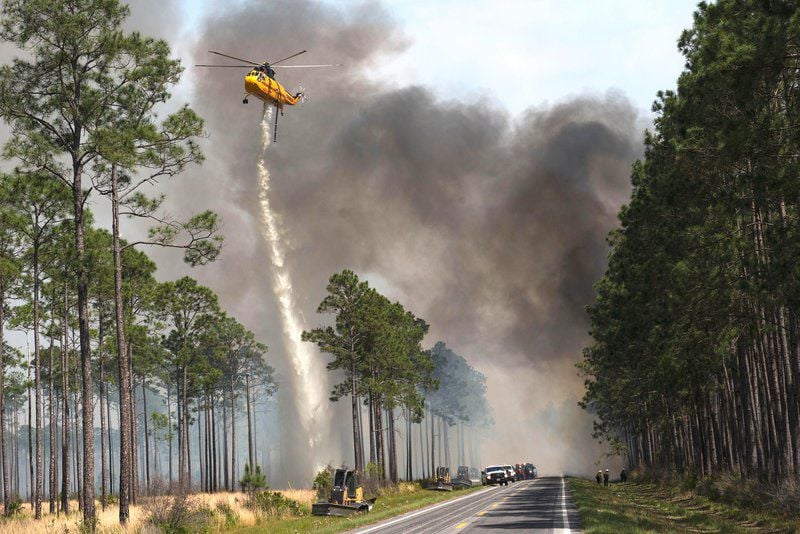 The Valdosta Daily Times has been covering this fire right along, most recently by Terry Richards, VDT, 2 May 2017, Rain barely felt at massive swamp fire,

FARGO — A mild rainfall Monday had little to no impact on the West Mims Fire burning through the Okefenokee Swamp, according to a firefighter.

The blaze, which had burned more than 100,000 acres by Tuesday afternoon, received about a tenth of an inch of rain from a weak cold front that moved through South Georgia Monday.

Maybe they’ll get more rain in the swamp today. As you can see, the West Mims fire is in the headwaters of the Suwannee River, and Billys Island has been burning.

The latest update posted on InciWeb is for 3 May 2017, which says 107,846 acres burned, 492 personnel, 50 wildland fire engines, 5 dozers, 32 tractor plows, with the same 6 helicopters and 2 interagency hot shot crews. All entrances to the NWR are closed, except: The same temporary flight restrictions are in place, plus:

Driving restrictions: Hwy 177 is closed 11 miles north of the intersection with GA 94 at the entrance to the Okefenokee National Wildlife Refuge. Temporary road closures will occur as needed due to smoke or equipment.

The West Mims Fire has grown to 111,650 acres in and near the Okefenokee Swamp, an increase of nearly 4,000 acres in a day, the fire incident team said Thursday during its noon update.

A fire meteorologist said there was a 70 percent chance of rain as a cold front approached but coming with it were expected southeast winds with 30 mph gusts, the West Mims Incident team said in a prepared statement.

“This is the best chance of rain we’ve had for the past 3½ weeks,” and there could be as much as a half inch, incident meteorologist Angela Enyedi said.

If it rains, the benefits would last for only a day or two as a very dry air mass and persistent westerly winds are likely to come right behind the storm system.

Looks to me like the rain that is still passing over me is about to arrive at the swamp. Enough rain might put the fire out, but that would take a lot of rain, since it’s now a smoldering peat fire in addition to a forest fire.

If the rain doesn’t do the trick, the estimated containment date on InciWeb is still November 1st. That surprises many people.

Natural Fire in a Fire Forest

Yet before the Smokey Bear fire-prevention campaign started in the 1930s, forest fires started by lightning or humans could burn for many miles and many months. This is normal in a fire forest, and it’s a good sign that they’re not trying to put it out completely. I hear the extension of the date to November is partly because the fire is now into the peat in the swamp, which can smolder for a long time.

Many people wonder why not try to put it out completely? Because suppressing fires lets tinder build up until a fire would be uncontrollable. Because without frequent fire the species mix changes. Lots more information in The History of Fire in the Southern United States, by Cynthia Fowler and Evelyn Konopik, Human Ecology Review, Vol. 14, No. 2, 2007, pp. 165-176.

Notice instead of 20 to 40 years apart now they’re 4 to 6 years apart. Sure, some of the longer intervals were in the fire-suppression times. But way back in the 19th century the intervals tended to be 20 years or longer. Something is different.