groundflow actually goes the other way, drilling under a river will change water flow in the Floridan Aquifer, and there is very high risk of sinkhole collapse. An indigenous Floridian commissioned this scientific report to protect his mother, the living earth. This geological report provides compelling additional reasons for the U.S. Army Corps of Engineers (USACE) to open a new process to evaluate this and other new information.

Bobby C. Billie, one of the Clan Leaders and Spiritual Leader, Council of the Original Miccosukee Simanolee Nation Aboriginal Peoples, asked professional geologist and hydrologist Peter Schreuder, P.G. to conduct investigations at the proposed Sabal Trail crossing under the Suwannee River from Hamilton County and under U.S. 90 in close proximity to the Falmouth Cave System in Suwannee County.

This Schreuder report concludes about the Floridan Aquifer System (FAS):

“The research presented herein indicates that there is the potential for a major impact to occur to the karst system during the execution of the proposed HDD Proposed Project under the Suwannee River at the Suwannee River State Park site. A sudden release of the mud flow at 1,500 psi may cause a collapse in the FAS. If that happens there will be a potentially massive occurrence of numerous sinkholes resulting in a catastrophic collapse of overburden materials into the underlying caves and springs along the river. Unless the applicant is required to conduct a thorough and detailed geophysical investigation along the proposed borehole alignment, and all other environmental and cultural concerns associated with the entire length of the proposed pipeline are adequately addressed, this Proposed Project should not be allowed to proceed as designed.”

It has been said that rejecting or denying Science does not eliminate the inevitability of its influence. Certainly in the development of Florida over the past century, consider the ecological tragedies associated with the extensive destruction, desecration, and damages to Lake Apopka, Lake Okeechobee, the Kissimmee River, the Everglades, most of Florida’s Springs, and the Floridan Aquifer as a few examples of how politics and influential private economic interests have circumvented science through institutional maneuvering—or more bluntly, corruption.

The approval by the Federal Energy Regulatory Commission (FERC) of the proposed fracked gas pipeline project known as the Sabal Trail Pipeline (STP), represents a continuation of this practice. This 515.5-mile pipeline would cross under, over, and through some of Florida’s most unusual and environmentally sensitive landscapes, and Florida Waters: water recharge areas, wetlands, creeks, rivers, springs, and critical wildlife habitat. STP risks our sensitive landscapes and hydrological features, and the health, and safety of Florida residents, with potential devastating consequences to the Floridan Aquifer and Florida’s worldwide-treasured Springs.

This new hydrogeology report corroborates and adds to what was found earlier about the same sites in a report by Dennis J. Price, P.G. The two professional geologists do not know each other, and they wrote their reports entirely independently, each using some different information.

While FERC has issued a certificate of convenience and necessity for Sabal Trail, after a flawed Final Environmental Impact Statement (FEIS), FERC has not given Sabal Trail approval to begin construction. Meanwhile, several state permits remain outstanding. FERC’s issuance of that certificate before those state permits would appear not to be legal according to the letter of the Clean Water Act.

Perhaps most importantly, the U.S. Army Corps of Engineers (USACE) has not issued any permits for Sabal Trail or its related pipelines, and usually does not until all state permits are issued. Indeed, the letter of the Clean Water Act seems to say it would be illegal for the Corps to issue a permit without those state permits.

We strongly urge all those 21 Florida counties to have independent investigations conducted at STP routes in their counties, and to request the U.S. Army Corps of Engineers (USACE) to conduct a Supplemental Environmental impact Statement (SEIS) as was requested by Hamilton, Suwannee, and Marion counties due to discrepancies and insufficient information provided by STP. A SEIS can help clarify of questions and concerns expressed by many, and may prevent environmental disasters along the way.

Individuals and groups, whether environmental or about property rights or economy, can also ask the Corps to issue a SEIS.

And they can ask their elected officials, from counties and cities to state to federal, to do what U.S. Rep. Sanford Bishop of Georgia’s Second Congressional District has already done, and ask the Corps for a SEIS.

According to his professional c.v.:

“Mr. Schreuder has more than 40 years of experience in groundwater hydrology, with much of that experience in Florida.”
http://wwals.com/blog/wp-content/themes/pianoblack/img//2016/06/PETER-J-Schreuder-Sabal-Trail-Resume.pdf

“E. Allen Stewart III served as principal engineer and vice president of HydroMentia, Inc. of Ocala, Florida, from 1996 until his retirement in 2012. He is a native Floridian, having been born in St. Petersburg and reared in Cocoa. He presently resides in Punta Gorda. His career of 40 years has been exclusively in Florida, including involvement in the development of environmental regulations and in the technical review of major environmental restoration programs in central and south Florida. He has been a lifetime advocate of environmental preservation and reclamation, and has been particularly involved in projects associated with the protection and restoration of Lake Apopka, Lake Okeechobee, The Indian River Lagoon, and The Everglades.”
http://wwals.com/blog/wp-content/themes/pianoblack/img//2016/06/EAS-resume-2016.pdf

Bobby Cypress Billie is an Educator and Environmental and Aboriginal Rights advocate. He has assisted individuals and groups across the State of Florida and beyond in their environmental struggles and continually educates on the importance of biodiversity of Nature and caring for the Natural Systems.

Bobby C. Billie received the Florida Peace and Justice Dr. Spock Award in 1996, the Sierra Club Cypress award in 1999 and has received numerous certificates of appreciation for his efforts.

Billie is concerned about the Sabal Trail Pipeline not just because it threatens Florida’s Hydrology, or that it could disturb the sacred burial grounds of his ancestors, but because it harms the living earth, what he refers to as “his Mother”. He said, 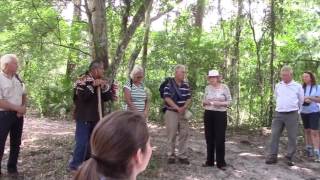 “We Indigenous Peoples, in our Land, where the Creator first created everything for us to follow by respecting the natural environment and natural systems, have been living in harmony and balance until the newcomers came into our Land. Over the past 500 years or more a lot of things have changed because of people who only value the dollar, a lot of things are not the same anymore after that and it is getting worse and worse. Our People have a prophesy, about this (pipelines). The prophesy tells us this is one of the last things. They are going to destroy the water, they are going to destroy the air, and the environment, and the human life. That is why we do not want to see Sabal Trail Pipeline happen, and we are going to do anything or everything to stop this from happening. We are going to stop this project for the future of all Life, even for the future and survival of the pipeline peoples’ grandkids and beyond.”

Are the environmental risks of building a pipeline which facilitates additional burning of fossil fuels (fracked gas causing environmental disasters and sickness across the country), and which provides short term profits for the wealthy few justified? Bobby C. Billie does not believe so, nor do many of Florida’s citizens.

Shannon Larsen, a fourth generation Floridian, born in Daytona Beach, has spent most of her adult life protecting the natural systems and speaking for those Creations that have no voice to protect themselves. She has worked with individuals and groups throughout Florida, Scandinavia, and Europe bringing a strong message to stop destroying the very systems that we, as human beings, are dependent upon for survival, and to respect other cultures and their way of life.

The USACE has been referred to by some as “the diligent destroyers” because of their enthusiastic pursuit of building structures that facilitate manipulation of water flows and quality without due consideration of the environmental consequences. Their efforts have led to the deterioration of the Everglades and Florida Bay, the diking of Lake Okeechobee, back pumping of polluted waters into Florida lakes, and the diversion of excessive freshwaters into the Caloosahatchee and St. Lucie Rivers. This ecological damage is now threatening Florida’s tourist industry, its fisheries, and its drinking water resources, as well as causing widespread devastation to indigenous plants and animals.

The proposed Sabal Trail Pipeline represents a continuation of the USACE’s bad behavior by not pursuing a meaningful scientific review and in not responding to the many requests from landowners, environmental organizations, concerned citizens, county commissioners, congressional members, professional geologists/hydrologists/ engineers, and Indigenous Peoples asking for the USACE to conduct site visits, host meetings, and conduct a Supplemental Environmental Impact Statement of the STP Project.

When regulatory agencies fail to properly exercise their legal obligations it jeopardizes public health and safety, our natural environment, waters and air, and wildlife. As referenced above, we have seen the result of regulators failing to uphold their professional responsibilities. Therefore, during the USACE Permit review of STP Project, it is imperative for all parties to come together to make sure that all public concerns have been properly addressed.

Join us in our efforts to Defend and Protect our Natural Areas, Natural Systems, Waters and Wildlife for our Future Generations yet to come.

WWALS Watershed Coalition (WWALS) is the WATERKEEPER® Affiliate for the upper Suwannee River basin. WWALS advocates for conservation and stewardship of the Withlacoochee, Willacoochee, Alapaha, Little, and Upper Suwannee River watersheds in south Georgia and north Florida through awareness,environmental monitoring, and citizen activities.

WWALS has been opposing the unnecessary, destructive, and hazardous Sabal Trail pipeline since 2013, including legal action in Florida and assisting in Georgia with the historic 128 to 34 March 2016 vote by the Georgia legislature to deny river-drilling easements; see http://wwals.com/blog/issues/stt/.

WWALS Board Member Christopher J. Mericle, who helped coordinate with the producers of this new geology report, said,

“I live near where Sabal Trail wants to drill, I know many people right on the pipeline path, and I use the Suwannee River and I go to Falmouth Spring, so I care about these Outstanding Waters of Florida and about my neighbors. So I welcome this new evidence that supports WWALS’s contention that the Sabal Trail Pipeline is a bad idea.”

“Peter Schreuder’s independent report is very welcome, as it adds further evidence of the hazards of this unnecessary Sabal Trail pipeline boondoggle. The U.S. Army Corps of Engineers should open a Supplemental Environmental Impact Statement to evaluate this and other new evidence.”

About the Sabal Trail Pipeline

Sabal Trail and its offshoot pipelines would gouge through 21 of Florida’s 67 counties, and all of Florida drinks from the Floridan Aquifer that is threatened by Sabal Trail.

Sabal Trail proposes a 36-inch diameter underground pipeline to carry “natural” gas originating from the Marcellus Shale in Pennsylvania or other fracking locations. Sabal Trail is a joint project of pipeline company Spectra Energy of Houston, Texas, Duke Energy of Charlotte, North Carolina, and NextEra Energy of Juno Beach, Florida. NextEra is the parent company of Florida Power and Light (FPL), whose ratepayers are footing the bill for this $3 billion project.

But that’s not all.

Omitting duplicates, that’s 21 Florida counties affected by Sabal Trail or its offshoots. That’s almost a third of Florida’s 67 counties. If we count the other counties through which FECR runs from Miami to Jacksonville, that would be at least eight more for at least 29 counties.

And that’s not counting affected counties not directly on the pipeline path, such as Madison County, through which Sabal Trail no longer aims its pipeline, but whose Madison Blue Spring State Park is just on the west side of the Withlacoochee River, less than a mile from Sabal Trail’s proposed path through Hamilton County.

Once again, all of Florida drinks from the Floridan Aquifer.