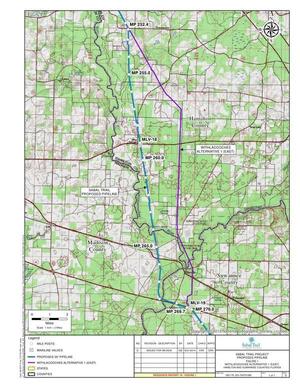 Will Sabal Trail actually move off the Withlacoochee River in Florida? That depends on how you interpret which version of what Sabal Trail has said about its seven (7) different proposed fracked methane pipeline routes through Suwannee County, Florida. And all but one of the five proposed Georgia routes still would cross the Withlacoochee River in Lowndes County, Georgia. Beware that no matter what Sabal Trail says, FERC could pick any of these routes or some other. And no matter what FERC says, other agencies, including state and local, also have to approve permits and other evaluatios of any route, plus both Spectra Energy and Williams Company have recently “suspended” or cancelled pipelines as uneconomic. There is something you and your local elected bodies can do. 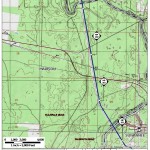 The pipeline’s prospective route runs through both Hamilton and Suwannee counties, crossing over the Withlacoochee and Suwannee Rivers.

The current route also goes through Madison County between those two rivers, as you can see in this map. But on with the article:

However, a geological survey revealed that the pipeline would endanger sensitive water areas both near and downstream of its crossing of the Withlacoochee. Hamilton County commissioners drafted a resolution in August telling Sabal Trail to steer clear of the Withlacoochee. Now, citizens in Suwannee County are asking our commissioners to follow suit.

“Following our geo-technical evaluations in the area of the proposed Withlacoochee River crossing, taking into consideration stakeholder input from this area,

That sure looks like Ms. Grover on the right in this picture from the FERC and Sabal Trail visit to Hamilton County 10 September 2014 that was organized by Chris Mericle (on the left in the picture). That was the day before Sabal Trail filed that update with FERC. 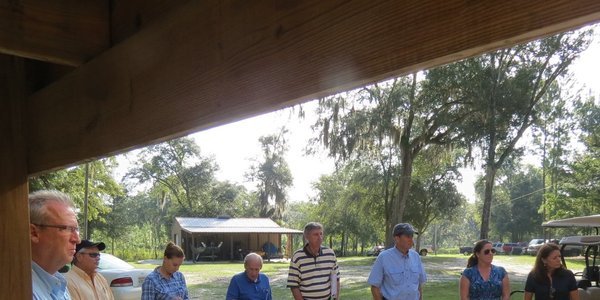 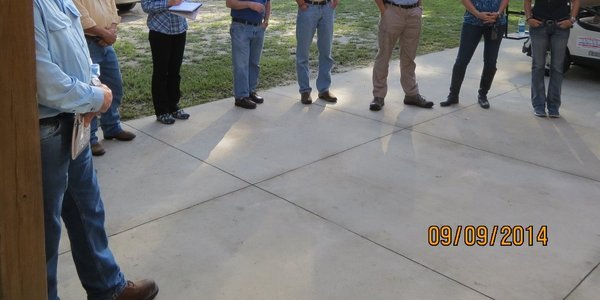 and in coordination with Federal Energy Regulatory Commission (FERC), Sabal Trail is evaluating potential reroutes to avoid crossing at the current location,” said Grover. “These options would eliminate this crossing of the Withlacoochee River. Sabal Trail is in the process of seeking survey permission to review options for an alternative route. Once all the surveys are complete, Sabal Trail will be able to determine its next steps in determining the viability of any route changes. It is important to note that these surveys do involve field work and assessments by geologists with knowledge of the regional terrain including karst. Should Sabal Trail determine that one of the potential reroutes is favorable, it will be recommended to FERC and the other environmental permitting agencies for consideration. FERC is the agency that determines the final pipeline route.”

Note Ms. Grover’s demand in the middle there for some landowners to permit surveys to get the pipeline off of other landowners.

So Suwannee County, Florida is in every proposed route for the Sabal Trail fracked methane pipeline, and there are at least seven of them, entering Suwaneee County from the west, the northwest, and the northeast, crossing the Suwannee River no matter which way. Maybe the Suwannee County Board of Commissioners should do something. As you can see, the underground limestone topography of much of Suwannee County looks quite similar to the area of Hamilton County that Sabal Trail is proposing to maybe move away from. At the Sept. 2 BOCC meeting, Patricia Tayman urged the Suwannee BOCC to “join Hamilton County in their efforts to become proactive and informed before making decisions about the Sabal Trail Transmission pipeline.”

More on that in the LAKE blog.

1 thought on “Sabal Trail to move pipeline off Withlacoochee River in Florida?”