Legal access to rivers and other waterways in Georgia is unclear, and federal law may trump state law anyway.

Dan Washburn wrote some time in 2000 for The Times of Gainesville, GA, Access denied: Owners, users spar over land, which applies as much to the rest of Georgia as to north Georgia:

The conflict in North Georgia is a confusing amalgam of the old and the new, of state and federal laws, of mountains and streams. Its cast of characters includes landowners and land managers, bureaucrats and businessmen, environmentalists and adventure seekers — and lawyers, plenty of lawyers.

And much of it involves a splitting of legal and philosophical hairs that would make Mother Nature and Uncle Sam cringe.

Nowhere has this tug-of-war played out more dramatically than on Georgia’s rivers and streams, where the dispute over what is public and what is private is as murky as the Chattahoochee River after a hard rain.

There’s a lot more in the article, including this box:

Getting to the water an issue for paddlers, anglers alike 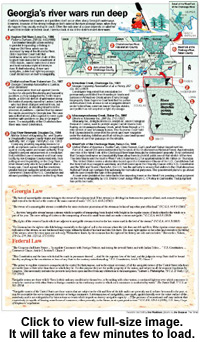 Being able to float or fish a river means nothing if access to the water is blocked. Since much of the land along streams is privately owned in North Georgia, paddlers and anglers often find themselves precariously scaling rocky slopes beside highway bridges — sometimes the only sure point of public access.

“I don’t see no harm you can do to … land if you’re just trying to get to a stream,” said G.W. Peeples, of Gainesville, who often fishes for trout on the Chattahoochee River near Helen. “They shouldn’t mind nobody just walking or something like that … but it’s their property, so if they don’t want you on it, I guess you got no reason to be on it.”

Few, if any, would argue the right of property owners to keep their land private. According to law, however, those property owners along “non-navigable streams” also are afforded exclusive fishing rights. That’s the case even for state-stocked fish, as when the Georgia Department of Natural Resources stocks trout in public streams and the fish swim into private sections of the waterway.

“The access has always been at the discretion of the land owner,” said Jeff Durniak, DNR regional fisheries supervisor for Northeast Georgia. “But with North Georgia developing, a lot of those tracks of land have been subdivided and it’s a lot more difficult … to get permission from 10 people rather than one.

“We need to remember what a treasure we have in the Chattahoochee National Forest,” Durniak added, speaking of the 750,000 acres of public land stretching across North Georgia. “So we will always have fishing in the mountains. These larger rivers, I really don’t know the answer there, because the law is the law and right now private property rights do reign supreme.”

Some paddlers are calling for a statewide public canoe trail system similar to Florida’s, which includes more than 30 waterways with public access points. DNR officials say such a plan wouldn’t fit into the department’s current budget.

“I don’t have any particular reason to expect that amounts of money are suddenly going to appear from nowhere for canoe access,” said Harvey Young, DNR executive assistant for program coordination. “If the canoe crowd can muster strong public support for what they want to do, then something might be made to happen.”

However, the DNR, with the help of conservation groups like the Trust for Public Land, is working to secure land along the Chattahoochee. Thus far, 109 miles have been protected.

Rand Wentworth, director of the Trust’s Georgia office, said his organization is also very interested in working with the DNR and the Georgia Canoeing Association to pursue a water-trail concept.