Madison Highway (GA 31) on the Withlacoochee River. Meet at the Clyattville-Nankin Road putin at 9AM, put in at 10AM, Saturday, 22 June 2013. Join the facebook event if you like. See you there!

Update 20 June 2013: How are we getting back to our vehicles with this trip? We’ll deposit all the boats at the put-in (Clyattville-Nankin Road), take most of the vehicles down to the take-out (Horn Bridge on Madison Highway aka GA 31), carpool in a few vehicles back to the put-in, and float down the river.

The section includes where Clyatt Mill Creek enters, a truly fun set of rapids (two drops) at the Ga – Fla border, a very nice Second Magnitude Spring (that I have yet to find the correct name), the remains of the enormous abandoned trestle over the river of the Georgia & Florida Railroad,

or Ole God Forsaken as it was nicknamed, the ghost town of Olympia on the Georgia side, and several Indian quarry sites. It is along this section that the river cuts deeply enough that the banks switch from sand banks to limerock cliffs. Paddle distance is about 9 miles, so a little over two hours paddling time. There are plenty of places to stop and look around.

There are shoals right at the state line, so beware, esp. if you’re in a canoe. The book Canoeing and Kayaking Georgia, by Susanne Welander, Bob Sehlinger, and Don Otey (2004) says: 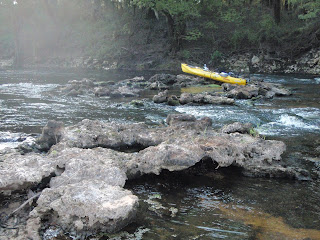 The limestone shoal that forms the foundation of this rapid is jagged; avoid contact with it by running this on the left. Signs of habitation are sparse, although simmers are frequently encountered on bridge crossings and anglers are likely to turn up anywhere. The current is moderate, and other than the small shoals mentioned, deadfalls create the only hazard to navigation. Update 20 June 2013: “So is the river up or is it down as the normal level?” It’s up, above 5 feet where Okapilco Creek comes in, which is higher than it is most of the year, and well above its 2 foot low for the past 12 months, according to USGS gauge data. Here’s a picture near Clyattville-Nankin Road taken 7 July 2007. The USGS data don’t go back that far, but it’s a safe bet that the river is higher now after the recent rains than it was that July: There are boat ramps at each location. Here’s a map of how to get between the putins: 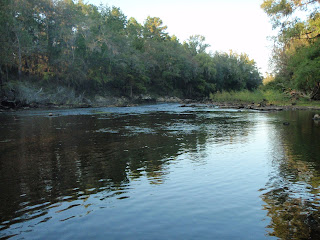 For more pictures see South Georgia Kayak Fishing, but the river is higher than when those were taken in October 2009.